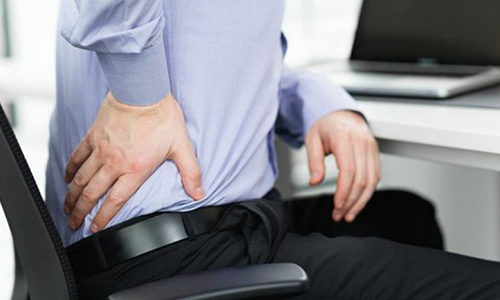 ADELAIDE – Blending behavior-modification tactics with ergonomics may help workers avoid occupational pain and injuries, according to a report from Australia. Laborers in a variety of jobs who got safety training tailored to their degree of awareness and motivation to prevent injury were 60 percent less likely to report lower back pain than workers who got standard ergonomic interventions. Workers at companies that communicated about safety and made it a priority also reported lower levels of joint and muscle pain. Lead author Paul Rothmore of the University of Adelaide said the risk factors for workplace strain are both physical and psychological. Heavy lifting, forceful movements, awkward postures, and standing still for extended periods may increase the risk for musculoskeletal effects, he told Reuters Health. In addition, low job satisfaction, high levels of stress and monotonous work may also be risk factors, Rothmore said. Work-related disorders affecting the muscles, joints, nerves, and spine are also costly for employers, the researchers point out. As reported in Occupational and Environmental Medicine, they investigated a method for improving workplace safety known as the "stage of change" approach. Stage of change theory is typically encountered in behavior-modification programs focused on increasing healthy behaviors or breaking bad habits. When applied to workplace ergonomics, it is “a fairly simple and straightforward way of finding out whether workers are aware of and interested in reducing their risk of musculoskeletal disorders,” said Judy Village, who studies injury prevention and workplace design at the University of British Columbia. “If they are unaware of the problem, providing solutions is likely to be ineffective,” said Village, who was not involved in the study. Rothmore and colleagues surveyed 242 workers from 21 companies. Participants were then designated as being in one of five stages of preparedness for change, ranging from Precontemplation, in which workers are unaware of workplace hazards, through Maintenance, in which workers have already made changes and want to avoid resuming old habits. The participants worked in a wide range of sectors including food industry, healthcare, mining and professional services. The research team conducted 25 interventions, 12 of which were designed according to the stage of change model. The other 13 were standard ergonomics recommendations based on observation of their worksites. Managers at each company also received written recommendations based on their workers’ readiness to address safety. The managers then decided which interventions to use based on affordability and achievability for the company. The interventions varied across companies and included redesigning tools and workstations, buying new equipment, rotating jobs, worksite inspection programs and exercises for workers. One year after the study began, the researchers surveyed the workers again and found that musculoskeletal pain had increased for both groups, although the increase was small enough in the Stage of Change group that it could have been due to chance. The comparison group had a significant increase in lower back pain, while the Stage of Change group did not, making the latter 60 percent less likely to report lower back pain. There were no significant changes in the safety climate of the workplace or workers’ job satisfaction. Workers’ readiness for change also did not change significantly in either group. “It must be noted that pain increased in both groups . . . which is not an expected outcome of ergonomic interventions, tailored or otherwise,” Village said by email. One limitation of the study, she noted, is little information about how knowledge of stage of change helped managers tailor the interventions. “It could be that the tailoring was ineffective or insufficient and that more than knowledge of stage of change is needed.” –Reuters