Taiwan braces for most powerful storm in years 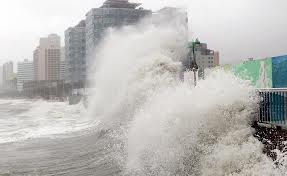 Taiwan braces for most powerful storm in years

HUALIEN COUNTY - Taiwan cancelled flights and school classes on Friday as the strongest typhoon in two years churned straight for the island and was expected to make a direct hit at the weekend. Typhoon Soudelor which is due to make landfall on Saturday (August 8) has already claimed its first victims, with two people dead and one missing in choppy waters off the coast of Taiwan's north-eastern Yilan county, the coast guard said. On Friday morning, a security cordon has set up to block the tourists from going close to the sea bank. "I was supposed to come here to see the sunrise, but I couldn't see the sunrise as it was blocked by the heavy clouds. Taiwan is very beautiful," said in unidentified tourist from mainland China. The high-speed rail and Taipei's metro system were operating as normal on Friday, though train services were expected to be hit on Saturday. The typhoon has winds of 173 kph (107 mph) close to its centre, said the Central Weather Bureau, making it the strongest storm to threaten the island since 2013's Typhoon Usage. It has already drawn comparisons to Typhoon Morakot in 2009 which blocked roads, levelled villages and killed dozens. Soudelor has also spurred the end of a week-long protest by students in front of the island's ministry of education against revisions to national history textbooks. Typhoons are common at this time of year in the South China Sea and Pacific, picking up strength from warm waters before losing strength over land. -Reuters