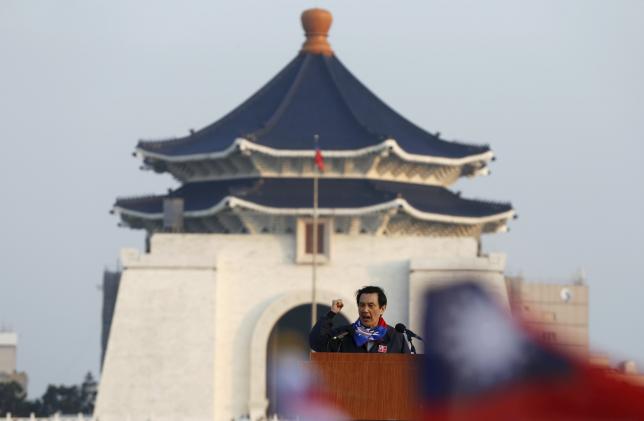 TAIPEI - Taiwan President Ma Ying-jeou will fly to the Taiwanese-held island of Itu Aba in the disputed South China Sea on Thursday, a visit that comes amid growing international concern over rising tensions in the contested waterway.

Ma's office said the president, who steps down in May, wanted to offer Chinese New Year wishes to residents on Itu Aba, mainly Taiwanese coastguard personnel and environmental scholars. Ma will spend a few hours on Itu Aba, known as Taiping in Taiwan, his office added.

Itu Aba lies in the Spratly archipelago, where China's rapid construction of seven man-made islands has drawn alarm across parts of Asia and been heavily criticised by Washington.

Taiwan has just finished a $100 million port upgrade and built a new lighthouse on Itu Aba, which has its own airstrip, a hospital and fresh water.

Ma's visit follows elections won by the independence-leaning Democratic Progressive Party (DPP). Ma's office said it had asked DPP leader Tsai Ing-wen to send a representative, but the party said it had no plans to do so.

Both Taiwan and China claim most of the South China Sea. Vietnam, the Philippines, Malaysia and Brunei also have competing claims.

Ian Storey, a South China Sea expert at Singapore's ISEAS Yusof Ishak Institute, said he expected the Philippines and Vietnam to lodge a strong protest, likely seeing the visit as a violation of their claimed sovereignty over Itu Aba.

"But I do think it is unlikely they would stage a similar visit involving a senior political figure going to one of their own occupied islands ... that would risk inflaming relations with China and neither want to go that far," Storey said.

Asked to comment on Ma's planned visit, the mainland's Taiwan Affairs Office reiterated that China and Taiwan had a common duty to protect Chinese sovereignty in the waterway, through which $5 trillion in ship-borne trade passes every year.

"Safeguarding national sovereignty and territorial integrity as well as safeguarding the overall interests of the Chinese nation is the common responsibility and obligation of compatriots across the straits," spokesman Ma Xiaoguang told reporters in Beijing.

The claims of both China and Taiwan are based on maps from the late 1940s belonging to the Nationalists, when they ruled all of China. The Nationalists fled to Taiwan in 1949 after being defeated in a civil war with China's Communists.

Beijing deems Taiwan a wayward province to be retaken by force if necessary.

But it has appeared unfazed by Taiwan's upgrading work on Itu Aba. Military strategists say that is because Itu Aba could fall into China's hands should it ever take over Taiwan.

Taiwan for its part has tended not to take sides with China in the South China Sea, despite the historical connection, given the political mistrust between them and because of its need to maintain good ties with the United States.

Dustin Wang, a long-time Taiwanese scholar on the South China Sea and who has visited Itu Aba, said one of Ma's goals was to highlight the island's civilian uses.

"Ma will demonstrate that facilities on the island, like the hospital, provide humanitarian assistance and disaster relief," he said.

The island supports around 180 people, about 150 of them coastguard personnel who have had oversight of the 46-hectare (114-acre) island since 2000. The last Taiwan president to visit Itu Aba was the DPP's Chen Shui-bian in 2008. -Reuters