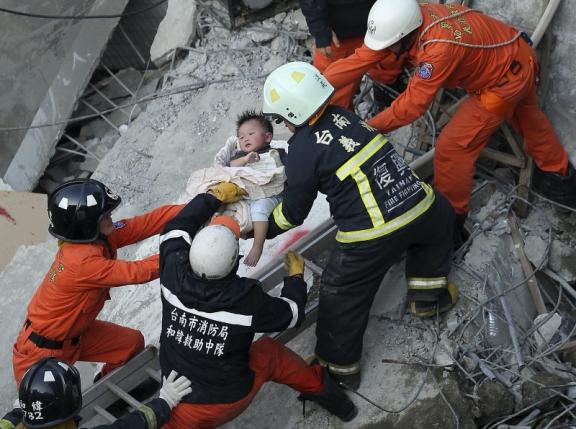 TAINAN, TAIWAN – A powerful earthquake struck Taiwan early on Saturday killing at least 12 people, most in a 17-storey apartment building that collapsed, with some people still known to be missing in the ruins of the complex as night fell, government officials said.

As rescuers searched for survivors, questions were raised about the construction of the Wei-guan Golden Dragon Building in the southern city of Tainan, with its floors that pancaked down on each other when the 6.4 magnitude tremor hit at around 4 a.m. (2000 GMT), at the start of a Lunar New Year holiday.

Ten of the dead, including a 10-day-old girl, were from the apartment building. The baby was found in her dead father's arms, media reported.

Rescuers mounted hydraulic ladders and a crane to scour the ruins, plucking survivors to safety, with hundreds taken to hospital, though many were quickly released.

An 18-year old man was found alive and conscious shortly after dark, and rescuers were working to get him free, while a 30-year-old woman, a nine-year old girl and a male toddler were pulled out alive, Taiwan television said.

Buildings in nine other locations in the city of 2 million people had collapsed and five were left tilting at alarming angles, a government emergency center said.

But a fire department official said rescue efforts were focused on the apartment block, where a child's clothes fluttered from a first-floor laundry line and the smell of leaking gas hung in the air.

"I was watching TV and after a sudden burst of shaking, I heard a boom. I opened my metal door and saw the building opposite fall down," said a 71-year-old neighbor who gave his name as Chang.

A plumber, he said he fetched some tools and a ladder and prised some window bars open to rescue a woman crying for help.

"She asked me to go back and rescue her husband, child, but I was afraid of a gas explosion so I didn't go in. At the time there were more people calling for help, but my ladder wasn't long enough so there was no way to save them."

Earlier in the day, an elderly woman, wrapped in blankets, was strapped to a board and slowly slid down a ramp to the ground as the cries of those still trapped rang out. Rescuers used dogs and acoustic equipment to pick up signs of life in the rubble.

Authorities said there were 96 apartment units in the Golden Dragon Building and 256 registered residents, though more were in the building when it collapsed. Late in the day, city mayor William Lai said 5 people were missing there.

Rescuers clad in red and yellow overalls pulled over 240 survivors from the ruins and later inserted huge supports under slabs of leaning concrete to buttress the ruins as they searched for more.

City officials said it was too early to determine if poor construction was a factor in the building's collapse.

The construction and engineering companies that built the complex are no longer operating, records showed.

Two neighbors said they had felt nervous about the construction when the building was going up in the early 1990s.

"I looked at it and thought, only people from out of town would buy there. We local people would never dare," said one of the neighbors, Yang Shu-mei.

A major earthquake in central Taiwan in 1999 killed about 2,400 people and caused damage across the island, which lies in the seismically active "Pacific Ring of Fire".

Taiwan Semiconductor Manufacturing Co (TSMC), the world's largest contract chipmaker and supplier to Apple Inc, said some wafers made in Tainan had been damaged, affecting no more than 1 percent of first-quarter shipments.

Other major Apple suppliers in Taiwan reported no impact on operations. –Reuters