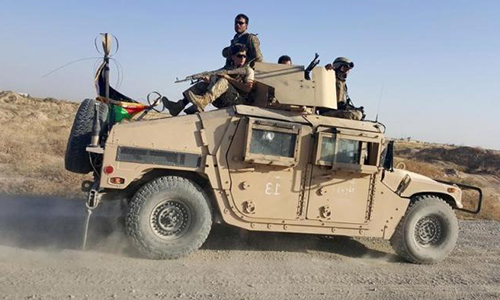 KABUL – Taliban fighters on motorbikes have carried out hit-and-run attacks on Afghan forces trying to clear Kunduz city of insurgents, more than a week after the militant movement briefly seized the provincial capital. Adopting new tactics, Taliban fighters have been firing at security forces at checkpoints and then melting away into residential areas, rather than directly engaging in gun battles, said Hamdullah Danishi, acting governor of the northern city. "This is a new policy for the Taliban," said Danishi. "They want to create fear among residents so they cannot resume their normal lives." The failure of US-trained Afghan troops and police to swiftly recapture Kunduz is an ominous sign for the government of President Ashraf Ghani and the administration in Washington. It underscores concerns about national forces' ability to protect the country when most of the remaining foreign troops leave. Already NATO forces are a small fraction of their peak, now that their formal combat mission has ended, and U.S. President Barack Obama is reassessing the timetable for a final drawdown which currently envisages removing all but a few US soldiers by the end of 2016. Battles have raged around Kunduz for the last nine days as government forces, backed by US air strikes, have tried to drive out Taliban fighters. Its brief capture was one of the Islamist militants' biggest victories in the 14-year insurgency. The city of 300,000, which was the last stronghold of the Taliban before the group's ouster in 2001, holds symbolic importance to the insurgency and has come under threat multiple times this year. Security forces reported significant progress in trying to retake Kunduz on Monday, and some shops in the center opened for the first time since it fell to Taliban fighters. But clashes broke out again on Tuesday, said Sayed Sarwar Hussaini, a spokesman for Kunduz police."There are sporadic shootings in some areas," he said.Zabihullah Mujahid, a spokesman for the Taliban, said on Tuesday morning that their fighters had surrounded the police headquarters and governor's compound in Kunduz, a claim which was rejected by local officials. At least 55 people have been killed and hundreds wounded in sometimes fierce fighting that marks an escalation in the Taliban's campaign to topple the Western-backed government in Kabul and reintroduce their harsh interpretation of Islamic law. In the capital, police said at three Taliban fighters were killed and seven policemen wounded in a 10-hour gun battle that began late on Monday after insurgents attacked a residential area close to the Russian embassy. The Taliban claimed responsibility, saying it was a suicide attack against an intelligence center in Kabul. An Afghan security source said two gunmen had attacked the house of a tribal elder in Kabul and an adjacent building belonging to a former governor of the southern Helmand province. –Reuters