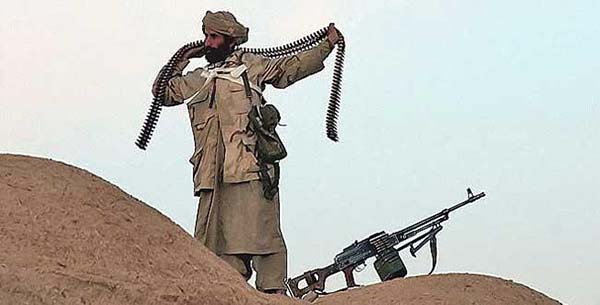 KABUL - Dozens of Taliban fighters aided by foreign militants seized Afghan government checkpoints in a previously stable northeastern province, officials said on Monday as the annual spring fighting season began in the 13-year-old war. Afghan officials said government forces later took back the district of Jorm in Badakhshan province but said they need reinforcements from the central government in Kabul. Fighting intensifies each spring as snows that make mountainous areas impassable melt, allowing greater movement of fighters and weapons. Fighting this year is being closely watched after the end of NATO forces' combat mission left Afghanistan's army and police to fight the resurgent Taliban on their own. The battle in Badakhshan killed at least 18 Afghan police and soldiers, eight of them beheaded, and left 10 wounded. At least 10 more are missing, Nawid Frotan, a spokesman for the Badakhshan governor said. "The situation is under control right now, but Taliban who fled to nearby mountains sporadically open fire on our security forces," he said. He said 19 militants were killed, 11 of them Afghan Taliban and eight classified as unidentified foreign militants. The Ministry of Defence said about 200 Taliban attacked in Badakhshan on Friday. It said 20 insurgents were killed and a total of 33 Afghan forces were either killed, wounded or were missing. The Afghan Taliban claimed responsibility for the attack saying they had killed 49 "puppets" and wounded 42. As recently as two years ago, Badakhshan, which borders Tajikistan in the north and China in its northeast, was considered one of the safest provinces in Afghanistan, but Taliban fighters have increased their activity, Frotan said. He said local officials had told the Kabul government it needed help to fight the insurgents but got no response. "There is a need for a bigger operation. We will witness a bigger disaster if the government does not react soon," he said. - Reuters