Taliban second round of talks with US in Doha: sources 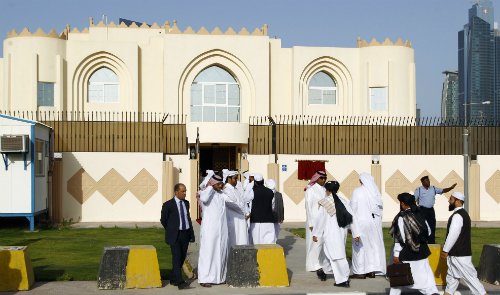 Taliban second round of talks with US in Doha: sources

DOHA (92 News) – The Afghan Taliban and US representatives began formal talks in the Qatar after the two sides agreed on a two-point agenda, the sources said. According to the sources, “US officials met with Islamic Emirate representatives in Qatar’s capital Doha. The negotiations will continue tomorrow (Tuesday).” The sources said that the Afghan Taliban said they would again start peace talks with the US in Qatar from Wednesday and continue till Thursday, this month. “The two-point agenda says a.) US-led foreign forces would end the “occupation” of Afghanistan, and b.) Afghan soil would not be used in future to harm any country,” It also said. Afghanistan has been beset by disagreement in recent weeks, with the United States opposing the Taliban’s decision to shut the Afghan government out of discussions. Senior Taliban leaders said that regional powers including Pakistan had approached them and wanted them to meet the US delegation in Islamabad and also include the Afghan government in the peace process but that the approaches had been rejected. Earlier today, a Taliban attack in central Afghanistan killed scores of security personnel, officials said, with some estimates putting the death toll at more than 100, amid government silence about one of the most deadly insurgent attacks in months. Attackers rammed a captured military Humvee packed with explosives into a training centre of the National Directorate for Security in Maidan Wardak province, west of the capital Kabul. At least two gunmen followed up, spraying the compound with gunfire before they were shot down. “We have information that 126 people have been killed in the explosion inside the military training centre, eight special commandoes are among the dead,” said a senior official in the defence ministry in Kabul, speaking on condition of anonymity. Local officials also said that scores of troops and NDS personnel were killed in the attack but there was no official confirmation of the casualty toll, with officials ordered not to talk to media for fear of damaging morale.