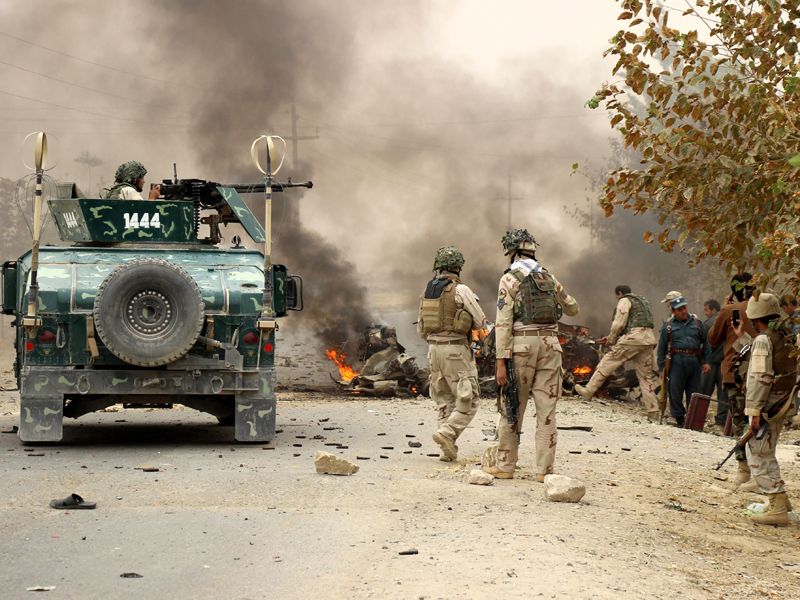 KABUL – Taliban insurgents stormed a court in the Afghan city of Ghazni on Wednesday, clashing with police for at least an hour in an attack in which 10 people, including all five of the militants, were killed, police said. The attack came days after the Taliban, who are fighting to topple the government of President Ashraf Ghani, vowed to seek revenge for the execution last month of six Taliban prisoners. The raid began when a suicide bomber blew himself up at the gate of the court and four more attackers fought their way inside, sparking an hour-long battle with police, said city police chief Aminullah Amarkhil. "Four civilian visitors and a policeman were killed in the attack but our forces were on high alert and shot dead the other bombers in no time," he said. The court building in the city, 150 km (100 miles) southwest of Kabul, was damaged, he said. Spokesmen for the Taliban were not available for comment. The militants had vowed revenge for the hanging on May 8 of six Taliban prisoners convicted of terrorism offences, as part of a tougher security policy in retaliation for an April suicide attack in Kabul in which 64 people were killed. The Taliban have made considerable gains in various parts of the country since the departure of most foreign combat troops at the end of 2014, and both government forces and the militants have suffered heavy losses in fighting. The United States killed the leader of the Taliban in a drone attack in southwest Pakistan on May 21 but the death of Mullah Akhtar Mansour has had no discernable impact on the violence. In another incident on Wednesday, a roadside bomb killed a top police administrator and wounded four policemen in the relatively peaceful northern province of Balkh, officials there said. –Reuters