DHAKA (92 News) – Bangladesh outplayed Pakistan by seven wickets in their second ODI match, also won the three-match series at the Sher-e-Bangla National Stadium, Mirpur on Sunday. Following in the rhythm of their first ODI win against Pakistan, Tamim Iqbal and Mushfiqur Rahim were once again the star performers for Bangladesh. Tamim’s 116 off 116 balls included 17 boundaries and 1 six while Mushfiqur Rahim’s 65 came off 70 balls with 8 boundaries and 1 six. Pakistan’s Junaid Khan, Saeed Ajmal and Rahat Ali grabbed one wicket, each. Earlier, after winning the toss, Pakistan posted a target of 240 runs for Bangladesh. Skipper Azhar Ali (36), Haris Sohail (44), Saad Nasim (77) and Wahab Riaz (51) were the only significant contributions as the other batsmen struggled against the Bangladeshi bowlers. Bangladesh’s Shakib Al Hasan bagged two wickets while Nasir Hossain, Rubel Hossain, Arafat Sunny and Mashrafe Mortaza captured one wicket, each. Bangladesh won the first ODI by 79 runs, breaking a 16-year winless spell against Pakistan. Tamim Iqbal was declared Man of the Match. The series third and final ODI will be played at the Sher-e-Bangla National Stadium, Mirpur on Wednesday. 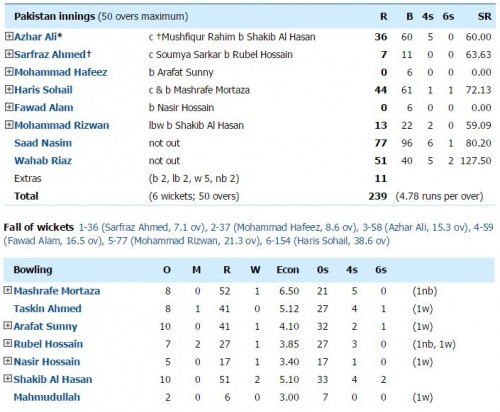 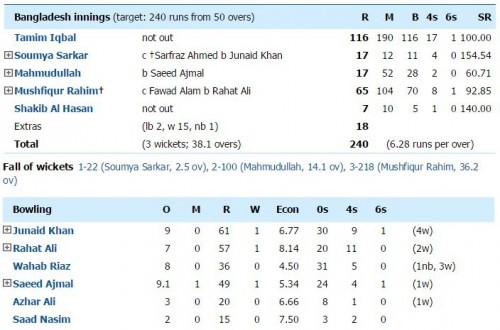