How tattoos can help patients with skin grafts and scars 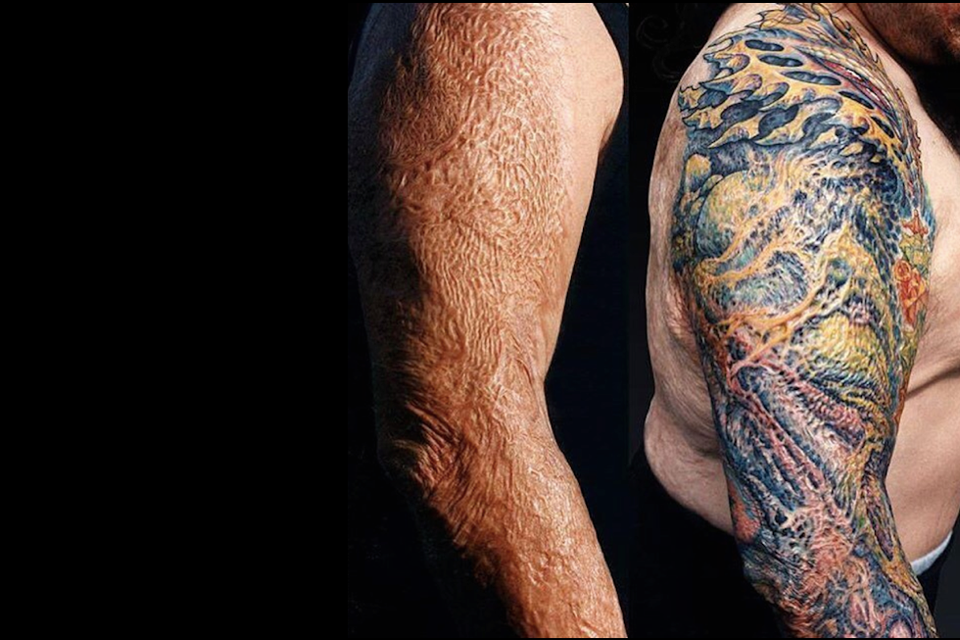 How tattoos can help patients with skin grafts and scars

UTRECHT - Patients who get tattoos to cover facial skin grafts and scars may feel happier with both their appearance and quality of life, a Dutch study suggests. The practice of using tattoos to cover damaged skin isn’t that new. Doctors even have a term for it: dermatography. These medical tattoos are not butterflies or lightning bolts; rather doctors use subtle coloration to make discolored areas match surrounding skin more closely. While it doesn’t cure disease, cosmetic changes made by tattoo needles can still have lasting health benefits, said one of the study’s authors, Dr. Rick van de Langenberg. “Scar and skin graft color abnormalities can result in impaired physical, psychological, and social well-being, especially in the facial area that is constantly visible to the patient and others,” van de Langenberg, a researcher at Diakonessen Hospital in Utrecht, said by email. For the study, researchers focused on 76 patients who received medical tattoos to cover scars and skin grafts left on the head and neck after cancer treatment. Most of the patients were female, and the participants ranged in age from 19 to 86. Many of the participants had skin cancer or melanoma, though some had oral or thyroid tumors or other types of malignancies. Researchers asked patients to rate how their scar or graft looked on a 10-point scale, with zero as “very ugly” and 10 as “very nice,” before and after they got tattoos. After the tattoos, average scores increased by 4 points to 7.8. In addition, researchers asked patients to assess their level of concern about the scar or graft contributing to a worse appearance or quality of life on a 5-point scale with one indicating “not at all” and 5 indicating “very much or often” concerned. This questionnaire had nine questions and after patients received tattoos the average score for each one of the questions increased by around one point. One limitation of the study is that it only included patients who decided to get tattoos, who may have had more concerns about their appearance or quality of life than people who opted not to do these procedures to modify scars or grafts, the authors note. Because researchers asked people after they received tattoos to rate their feelings about the results compared to how they felt before the procedures, it’s also possible that patients who benefited the most were more likely to join the study, the researchers also point out in JAMA Facial Plastic Surgery. Even so, the findings add to a growing body of evidence suggesting that improving the appearance of scarred skin can profoundly impact patients’ quality of life, said Dr. Jill Waibel of Miami Dermatology and Laser Institute. “Scars are usually a reminder to a patient of a negative life event – car accident, cancer surgery, fire, explosion, war related injury,” Waibel, who wasn’t involved in the study, said by email. Medical tattoos are most often done to create nipples for women after breast reconstruction following surgery to remove cancer, and this may be covered by insurance in the US when reconstructive surgeons offer the service, Waibel said. Overall, though, insurance coverage for tattoos and other types of scar revision treatment can be difficult, said Dr. Tina Alster, a dermatology researcher at Georgetown University Hospital in Washington, D.C., who wasn’t involved in the study. There are also risks to consider. Like the ink done by tattoo artists, work done by doctors still carries a risk of infection and scarring as well as challenges for doing certain medical imaging techniques on the site in the future, Alster added by email. Whether tattoos or other techniques such as laser procedures are used, altering the contrast between the color of scars or grafts and surrounding skin can have a big impact on how people perceive their appearance, said Dr. Chad Hivnor, a private practice dermatologist in San Antonio, Texas, who wasn’t involved in the study. “Color is one of the first things other people will notice, and thus social confidence will be improved with a closer color match,” Hivnor said by email. “Our eyes pick up sharp lines quicker than softer lines and so that stark contrast in color between the two types of skin will be minimized.” -Reuters