Tauqir challenges bowlers to get it right against South Africa 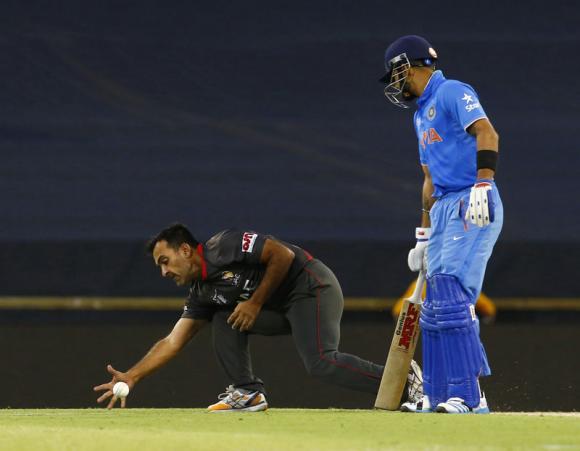 Tauqir challenges bowlers to get it right against South Africa

WELLINGTON - United Arab Emirates captain Mohammad Tauqir will be forced to back up his pre-match predictions and hope his bowlers hit their spots early after they won the toss and chose to field against South Africa in the World Cup on Thursday. Tauqir had said prior to the Pool B game that he did not expect South Africa to post a score in excess of 400 at Wellington Regional Stadium, as they had done against West Indies and Ireland in earlier matches. South Africa, one of the pre-tournament favourites, have still not qualified for the knockout stages after an inconsistent tournament. The matches where they posted in excess off 400 runs have been book-ended by losses to India and Pakistan and questions have been asked whether the side had truly shaken off the tag of World Cup chokers. De Villiers, however, said while the game was 'must win', it was also obvious he wanted the team to use it as a tune up for the quarter-finals, and they went in with a strong line-up despite the temptation to test their depth. "It's a very important game," he said. "It's not a maybe we'll win it kind of game. It's a must-win for us, very important. "A couple of guys need to get into form. I'd like to see a few players score some runs. "It's good exercise for everyone to go out there, to have a nice bowl, maybe for one or two of the part-timers to get an extra bowl. "We might need it in the knockout stages." South Africa - Hashim Amla, Quinton de Kock, Rilee Rossouw, AB de Villiers (captain), David Miller, JP Duminy, Farhaan Behardien, Vernon Philander, Dale Steyn, Morne Morkel, Imran Tahir UAE - Amjad Ali, Andri Berenger, Khurram Khan, Shaiman Anwar, Swapnil Patel, Saqlain Haider, Amjad Javed, Mohammad Naveed, Mohammad Tauqir (captain), Fahad Alhashmi, Kamran Shazad. – Reuters