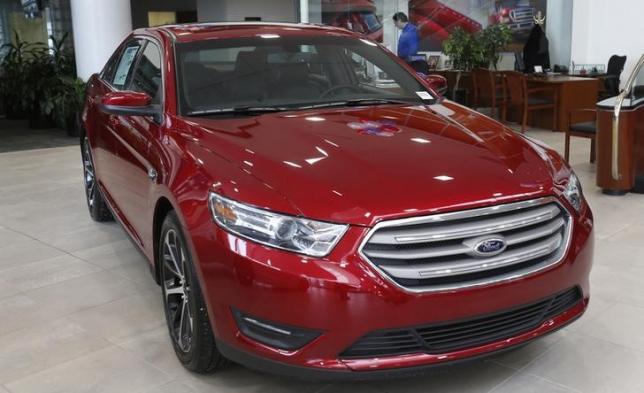 SHANGHAI/DETROIT - Ford Motor Co's (F.N) global premiere of its redesigned Taurus sedan in China underscores a shift in its U.S. home market from the big sedan to roomier, utilitarian crossover SUVs. There's a similar trend in China, the world's biggest car market, but there is still a decent appetite among Chinese buyers for large sedans while, in the United States, demand has stagnated. According to research firm IHS Automotive, China's market for large sedans has overtaken the United States, with sales of around 4 million last year, topping the 3.6 million sold in the U.S. By 2020, IHS expects that gap to have widened to 5.3 million large sedans in China and 3.7 million in the U.S. Ford unveiled the Taurus redesign, which it says is aimed specifically for the Chinese market and won't be for sale in the U.S., at a media event on Saturday ahead of the Shanghai autoshow. Ford hasn't said whether or when it will replace the current Taurus in the U.S. In China, Ford will aim the new Taurus at business people and entrepreneurs who want a car with a spacious back seat and a more conservative design, says spokesman Craig von Essen. Ford will assemble the car in Hangzhou, China with local partner Chongqing Changan Automobile (000625.SZ). "Large sedans being sold in China today are luxuries and there is a gap there between luxury brands and popular brands. That's where we're aiming this car at," Ford China Chairman and CEO John Lawler told Reuters on the sidelines of the Shanghai show. The Taurus is not going to be a volume leader in China for the Dearborn, Mich. automaker. "But Ford needs a premium, flagship car like the Taurus ... because in China there is growing demand for such cars from consumers trading up from run-of-the-mill midsize sedans," said James Chao, IHS Automotive's Asia-Pacific managing director. For Ford and other large sedan makers, the future looks to be outside the United States. Large sedans account for about 3 percent of the total U.S. car and light truck market, says Ford sales analyst Erich Merkle, down from 12 percent in 2000. Taurus sales in the U.S. slid by more than a fifth last year, and are down nearly 28 percent through the first three months of this year, according to Autodata figures. Ford is betting the Taurus can benefit in China from the legacy of the original 1985 American Taurus - which jolted the U.S. auto business with its aerodynamic styling. Initially derided by rivals, the Taurus proved a hit and pushed General Motors (GM.N) and Chrysler (FCHA.MI) to play catch-up by rounding off the corners of their boxy sedans. For several years in the mid-1990s, the Taurus was the best-selling car in the U.S., before being overhauled in 1997 by Toyota Motor's (7203.T) Camry. Ford's F-series pickups were then, and are still, the best-selling model-line in the U.S. Ford retired the Taurus name in the United States in 2006 as sales declined, but incoming CEO Alan Mulally revived the name a year later. - REUTERS