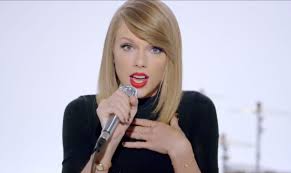 BEIJING - People associated with American pop superstar Taylor Swift's clothing brand have discussed removing some items bearing the controversial "1989" logo from the line of products that will be for sale in China, a person involved in the production process said. But a day before the seven-time Grammy winner's merchandise launch in China, it was unclear if those who proposed the self-censorship had prevailed. Some items in her U.S. clothing line feature the slogan "T.S. 1989", after her initials and birth year. "1989" is the name of both Swift's latest album and her world tour. "T.S." could be interpreted as a reference to Beijing's Tiananmen Square, the center for pro-democracy protests that were violently suppressed on June 4, 1989, with hundreds killed. China's Communist Party has banned references to the crackdown in state media, the Internet and books, leaving most young Chinese ignorant of those events 26 years ago. On Wednesday, two of Swift's representatives said that information supplied to Reuters about the withdrawal of the logo from merchandise in China was ”incorrect.” On July 20, Chinese e-commerce company JD.com Inc (JD.O) announced it would be the official online source of Taylor Swift items in China. Nashville, Tennessee-based brand development firm Heritage66Company has also been Swift’s partner in the China effort. The 1989 designs were displayed in an accompanying promotional video featuring Swift that can still be found on Heritage66’s microblog on the Chinese social media site, Weibo. However, a nearly identical video, accessible through a link on Heritage66’s main website, does not include the 1989 designs. In addition, images of the official Taylor Swift T-shirts, which appeared on JD.com on Thursday, did not carry the 1989 logo. Her album, bearing the 1989 logo, is available on JD.com. It includes the hit singles “Shake It Off,” “Blank Space” and “Bad Blood.” CHINESE AUTHORITIES Moves to drop the 1989 logo came after Western media reports about the JD.com announcement pointed out that the slogan could upset the Chinese authorities, said the source, who requested anonymity due to the sensitivity of the issue. The person could not confirm who proposed removing the products or whether the singer was involved in that process. There was no indication of any influence exerted by Chinese officials. China's Ministry of Culture declined to comment, and the Ministry of Commerce and the State Administration for Industry and Commerce did not respond to requests for comment. In response to questions from Reuters, Swift's publicist Tree Paine and Jay Schaudies, an artist manager affiliated with 13 Management, which represents Swift, said in a joint statement on Wednesday that "the Official Taylor Swift Merchandise line will feature many designs utilizing her name, lyrics and image as well as The 1989 World Tour logo and the cover of her current album, 1989. It is well known that 1989 is the year Taylor was born." Paine did not respond to follow-up requests for comment on whether that statement specifically referred to China. Official Taylor Swift products will also be sold in China on Alibaba Group Holding Ltd's (BABA.N) Tmall.com site. TREADING CAREFULLY The discussion over the 1989 logo underscores how carefully foreign businesses tread when engaging with the world's second-largest economy, particularly on issues the ruling Communist Party deems taboo. Chinese authorities can easily hurt companies' prospects given the control they have over many decisions that affect business. Last month, Reuters reported that Sony Pictures Entertainment (6758.T) stripped scripted scenes from the Adam Sandler movie "Pixels" because they depicted the Great Wall of China being damaged. Executives were worried Chinese authorities might see their country being cast in a negative light. Swift, who has 61.7 million followers on Twitter, is scheduled to play three shows in Shanghai on Nov. 10-12 as part of her May-December world tour, according to her official tour website. Tickets for the concerts in Shanghai are priced at 480-4,280 yuan ($77-$690). Last year, she sold out the city's 18,000-seat Mercedes-Benz Arena in just one minute - a record for China. Such limited China appearances are not a money-making proposition for Swift or most Western musicians, although it is a "huge potential growth market," according to Gary Bongiovanni, editor in chief of Pollstar, a trade publication covering the global concert business. According to the last annual report of the International Federation of the Phonographic Industry, China still provides just 1 percent of global recording industry revenue. Local music industry analysts say streaming of Swift's songs in China far exceeds those of many popular local artists, and Swift has hundreds of thousands more followers on China's Twitter-like Weibo than other Western artists such as Beyoncé. The singer-songwriter showed her influence last month when she helped force Apple Inc (AAPL.O) to reverse a policy of not paying artists during a free trial of its streaming service. She earned around $80 million in the year to June from sales of her "1989" album, world tour and endorsement deals, according to Forbes. -Reuters