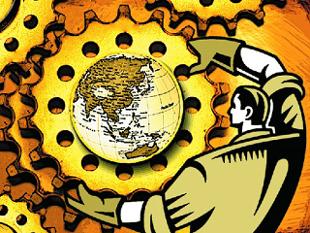 SAN FRANCISCO - Steve Gutmann used to have a basement that he never used. His Honda Civic sat idle in front of his Portland, Ore. house. Now strangers use Getaround.com to book Gutmann’s $6-an-hour car for errands and travelers stay in his newly refurbished basement apartment, listed at $115 a night on AirBnb. Gutmann and a business partner are developing a new app that lets people get more use out of their possessions. The apps mean "pretty significant productivity gains for a full range of things, from empty rooms to idle cars and bikes and all the other things that are marooned in people's garages," Gutmann says. That "sharing economy" has lured billions of dollars from investors, yet so far, it barely seems to register in U.S. economic data. Productivity - an area of the economy particularly sensitive to technological advances - has grown at just 1.25 percent a year since the 2008-2009 crisis, half its pre-crisis average. The decline has some economists arguing that official figures are simply failing to capture the effects of the sharing economy and other innovation, and that true productivity growth is much higher. If that is the case, then the Federal Reserve should feel more comfortable raising its interest rates for the first time in almost a decade. But here is the catch: better productivity also lowers business costs. So if the sharing economy makes things easier to find and cheaper to obtain - for example by using AirBnb's user-generated ratings system - it may also cause official data to overstate inflation, leaving the Fed further away from its 2 percent inflation goal. Consequently, the effects of any possible productivity understatement could effectively cancel each other out from the point of Fed policy. "If you think we think we are mismeasuring productivity as too low, you are also arguing that inflation is lower than we are measuring. This is a pretty important issue," San Francisco Fed President John Williams said earlier this month. However, for Williams and several other Fed policymakers, the decline in productivity growth from the pace of the late 90s to mid-2000s is real. That view implies slower potential economic growth and suggests that subdued wage growth may be part of a "new normal" rather than a hurdle to raising short-term interest rates. INFLATION PARADOX The sharing economy, also called a "gig economy", has grown quickly. Listings on AirBnb, by far the largest company offering peer-to-peer room rentals, now top 1 million, more than the biggest hotel chains. Uber, the largest firm in the transportation-sharing sector, operates in hundreds of cities and is valued at $50 billion. Still, it is hard to put too much stock in the idea that these two companies, or their much smaller rivals, are making much of difference to the economy on their own. "There's the potential for things to change in a large way," says Joshua Gans, chief economist of the University of Toronto's Creative Destruction Lab, of the effect of the "sharing economy" on productivity and growth. "But those things seem way into the future." Some economists argue that technology's impact on productivity is underestimated in part because government number crunchers are not adequately factoring in quality improvements. Two Goldman Sachs economists recently argued just that, and concluded that inflation as measured by the Fed's favorite gauge may actually be well below the current 1.25 percent estimate. Fed policymakers and their staff, for the most part, are having none of it. John Fernald, a leading researcher on productivity on the San Francisco Fed's staff, discounts mismeasurement as the cause of the drop in productivity, saying there is no reason to believe any miscalculations are any greater than in the past. To Fernald, the most likely reason for any understatement of productivity is a difficulty in anticipating how much a new technology could change the world. That is what happened in the 1990s, when it took years for businesses and households to make enough use of the Internet for it to show up in the data. "No one saw the productivity slowdown in the 1970s. No one saw the temporary productivity boost in the mid-1990s," Fernald said in an interview. "Statistically there are huge uncertainties about that which is just inherent in the fact that it’s hard to figure out which innovations are really going to be important." Productivity data is notoriously volatile, innovations take years to feed into the economy, and the damage to productivity wreaked by the recession may prove not so permanent after all, as new technologies help save time and money. That is the view of Fed board economist David Wilcox, one of the central bank's productivity optimists. Wilcox, who did not agree to be interviewed for this story, but whose published papers make clear his views, has argued that a large part of the drop in productivity growth since the 2007-2009 financial crisis is reversible as demand returns and start-ups embodying the latest technologies get the funding they need. -Reuters