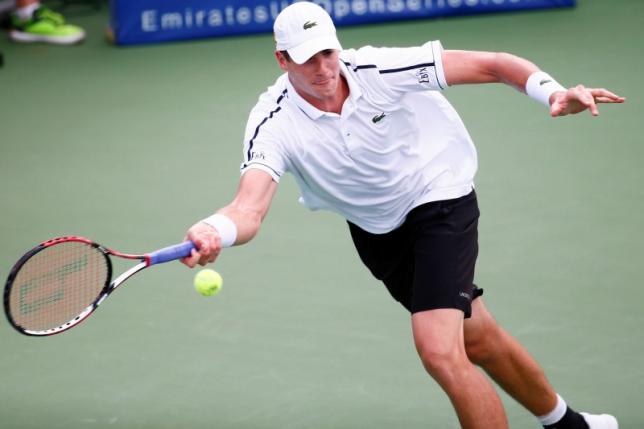 NEW YORK - Big-serving American John Isner and Cypriot Marcos Baghdatis will meet in the final of the Atlanta Open after hard-fought three-set semi-final victories on Saturday. Top seed Isner stayed on track for his third consecutive Atlanta title when he outlasted fellow American Denis Kudla in blazing heat on the outdoor hardcourt. Isner converted his second match point against the unseeded qualifier to triumph 4-6 6-2 7-5 in one hour, 43 minutes. The later semi-final was even closer, and longer, as fifth seed Baghdatis edged seventh seed Gilles Muller, of Luxembourg, 6-7(4) 6-3 7-6(4) in their finely balanced match. Baghdatis served for the match at 6-5 in the third set, only to tighten up and allow Muller to force a deciding tie-break.
"At 6-5, I have to be honest, I choked but I was able to keep calm and find a way in the end and I'm very happy about that," Baghdatis told ESPN after winning every service point in the tie-break.
A losing finalist at the 2006 Australian Open, he has four ATP titles but has not won a tournament since 2010 and will need to be near his best in his first final since 2011 to beat fellow 30-year-old Isner, against whom his career record is 0-5. Isner, who also dropped the first set in his semi-final, said a more aggressive approach to returning serve in the second set had been the key to victory. "That 2-1 game in the second set turned the match around," Isner said. "My shots found the court, I was able to break and it relaxed me a lot from there. "When I'm up a break I tend to serve my best because most of the time when I get one break I can take that set home." - Reuters