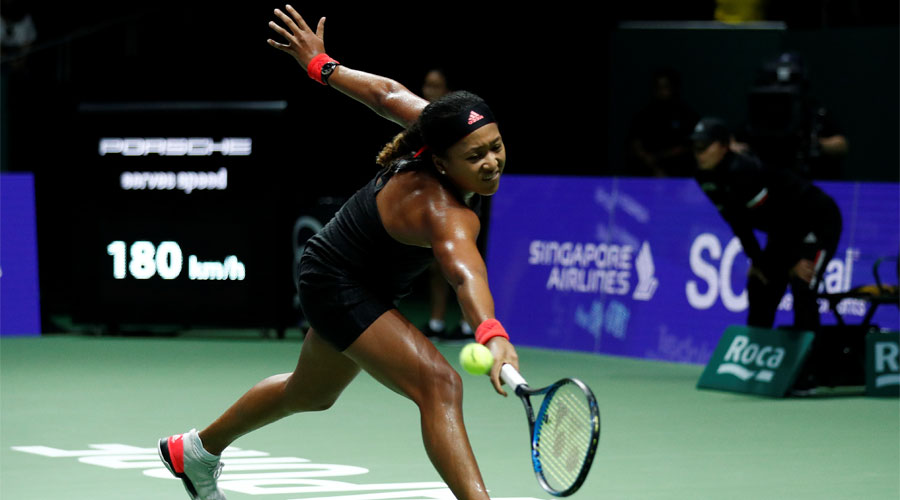 SINGAPORE (Reuters) - Naomi Osaka used her potent serve to punishing effect to claim the US Open title last month but the Japanese has been unable to harness it’s full power at the WTA Finals, losing her opening two round-robin matches in tight three-setters.
Defeats by Sloane Stephens and Angelique Kerber have left Osaka on the brink of elimination and even a win over Kiki Bertens in her final Red Group match on Friday would not guarantee a semi-final spot at the eight-player event. “I feel like this match was sort of a continuation of my last match in a way that I feel like I just didn’t serve well in either of them,” Osaka told reporters after her 6-4 5-7 6-4 loss to Wimbledon champion Kerber on Wednesday. “In a way, I’m very proud of myself for being able to make the matches so close without really having a first serve, but I don’t know. I feel like I’m not really sure how that’s going wrong, and I want to practice it. “I’m playing against the best players in the world, so I feel like I want to be in top form, but I’m not really there. So it’s a little bit depressing.” Osaka followed up her win at Flushing Meadows with a run to the Pan Pacific Open final in Tokyo and China Open semi-finals but the 21-year-old admitted that she had started to experience problems with her serve in Beijing. “I feel like there is a rhythm that I need to get into that I haven’t really been in touch with for the past few weeks,” she said. “Overall, I didn’t feel that bad in Beijing. Only the serve part. But the groundstrokes were fine. “I just think here for some reason, I can’t get the timing of the ball on the court, on the groundstrokes or the serves. “It’s a bit strange, playing against the top players and then not knowing what you’re going to do on the next ball. It’s been very interesting.” The world number four also felt that her regular displays of emotion in Singapore were a result of not being able to follow through on her burning desire to win matches. “I’m a perfectionist. I expect a lot from myself. I feel like when other people expect a lot from me, then it sort of doubles. I internalise a lot of things, then it just explodes and then I start talking to myself on the court,” she said. “I feel like whenever I want to win badly, then it starts becoming emotional, and I can’t really control too much when it starts going a bit sideways.”