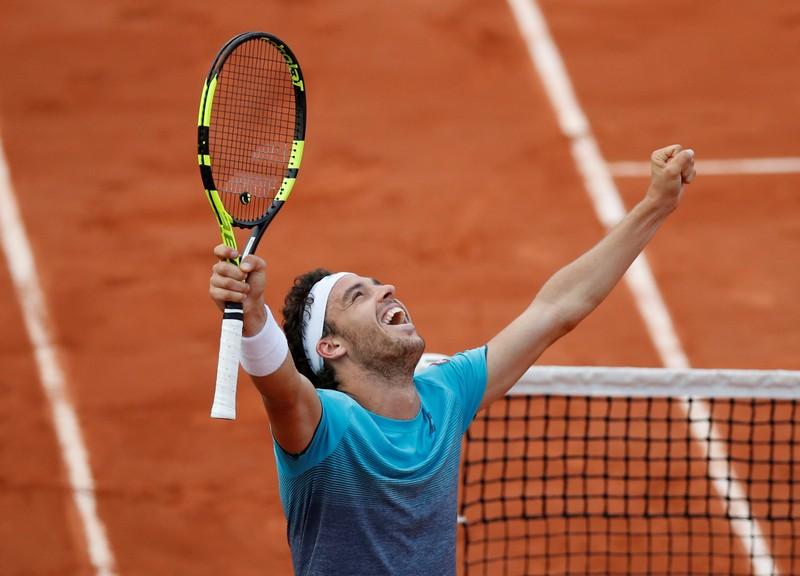 PARIS (Reuters) - Italian Marco Cecchinato celebrated the “best moment of his life” when he beat David Goffin to reach the French Open quarter-finals ,two years after being embroiled in a match-fixing controversy. In 2016 the Federation of Italian Tennis found the 25-year-old Sicilian guilty of a match-fixing offence during a Moroccan Challenger event in 2015 and banned him for 18 months , the highest-ranked player to be suspended for match-fixing. An investigation said it had found evidence that Cecchinato, and fellow player Riccardo Accardi, placed a bet on him to lose a match — a claim Cecchinato denied throughout. His ban was initially reduced to 12 months after an independent tribunal ruled he did not intentionally plan to fix a match and later in 2016 it was overturned completely by the Italian Olympic Committee because of irregularities regarding how the evidence was gathered. After that Cecchinato was free to return to the Tour, playing mainly on the Challenger Circuit in 2017. Unsurprisingly, he was not keen to talk  about that dark period in his career. “I don’t want to speak with this. Sorry,” the world number 72, who will face Novak Djokovic on Monday, told reporters. He was more forthcoming about a remarkable turnaround in fortunes having lost in the first round of his four other Grand Slam appearances. In toppling eighth seed Goffin 7-5 4-6 6-0 6-3 he became the lowest-ranked player to reach the quarter-final at Roland Garros since Ernests Gulbis in 2008. “For me, this is the best moment of my life. Maybe is a dream, because now I’m very happy for this match,” said Cecchinato, the ninth Italian man to reach a Grand Slam quarter-final in the professional era. Djokovic, the 2016 French champion and 12-times Grand Slam winner, awaits. “For me is amazing. Is a pleasure playing against Novak in quarter-final at Roland Garros,” the 25-year-old said. While Cecchinato’s run has surprised many he has shown form this year on clay, beating Italian number one Fabio Fognini in Munich in the build-up to the French Open. He also claimed his first ATP title in Budapest in April having come through the qualifying tournament.