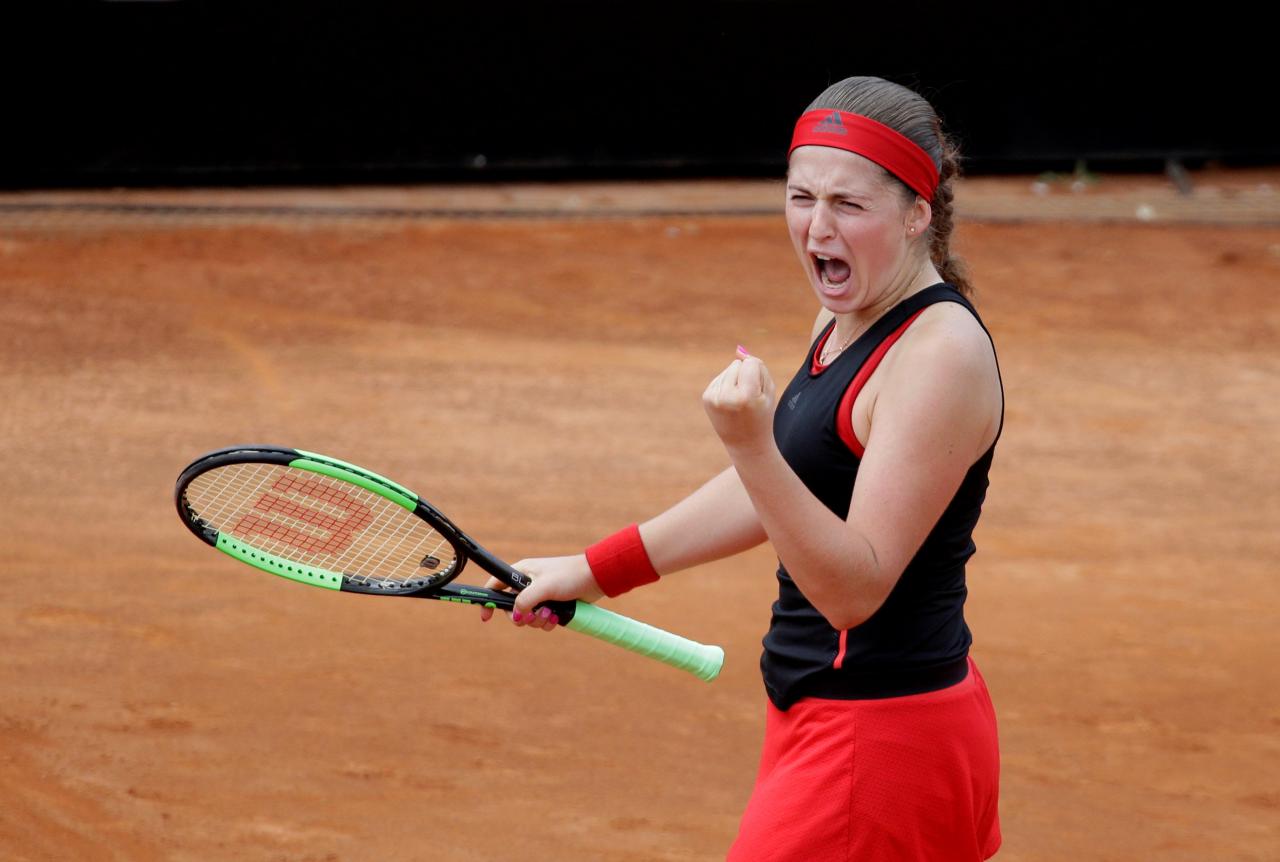 ROME (Reuters) - French Open champion Jelena Ostapenko ruined Johanna Konta’s birthday celebrations at the Italian Open on Sunday by coming from a set down to beat the Briton 2-6 6-3 6-4 and book her place in the quarter-finals. The Latvian started poorly, struggling to get her first serves in and making 28 unforced errors in all, but her fearlessness and aggression made the difference as the match wore on. Konta played with courage and intelligence on her 27th birthday, coming forward frequently to try and take time away from her opponent on the slower clay surface. The strategy worked until Ostapenko stitched together three winners to break Konta’s serve for the first time in the second set. Her nerves steadied, the Latvian began finding the lines with her shots and though Konta soldiered on gamely she had no answer to the sheer variety of winners, 36 in all, that flew past her. Next up for the 20-year-old is an intriguing clash with Maria Sharapova, a three-times winner in Rome. The Russian, who struck 38 winners of her own during her 6-3 6-4 win over Australian Daria Gavrilova, will hope she can cut down on the 32 unforced errors she made to survive her first meeting with Ostapenko. “I’ve seen quite a bit,” said Sharapova of her quarter-final opponent. “There’s something that really comes out from her on this surface, which she’s able to do really well.” The United States endured a dreadful day, with all three players who made the last-16 exiting. Eighth seed Venus Williams fell to Anett Kontaveit 6-2 7-6(3) for her second defeat by the Estonian in as many weeks after losing to her in Madrid. Madison Keys withdrew from her match with top seed Simona Halep with a rib injury. The walkover means the Romanian will retain the number one ranking if she progresses further in Rome than Dane Caroline Wozniacki. US Open champion Sloane Stephens was also knocked out after making an abysmal start against Caroline Garcia. A listless Stephens won a single game en route to surrendering the first set and though she fought back in the second, Garcia’s greater comfort level on clay saw her through 6-1 7-6(7). Defending champion Elina Svitolina bounced back from a first-set bagel to beat Russia’s Daria Kasatkina 0-6 6-3 6-2 and will meet Angelique Kerber, who brushed aside Maria Sakkari 6-1 6-1. World number two Wozniacki was pushed to three sets by Anastasija Sevastova, but prevailed 6-2 5-7 6-3 in the day’s last match.