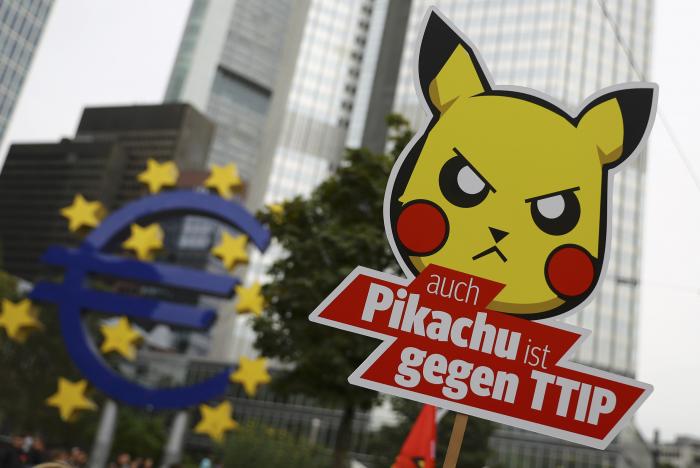 BERLIN – Tens of thousands of people protested in European cities on Saturday against planned free trade deals with the United States and Canada they say would undermine democracy and lower food safety, environmental and labor standards.
Organizers -- an alliance of environmental groups, labor unions and opposition parties -- said 320,000 people took part in rallies in seven German cities, including Berlin, Hamburg, Munich and Frankfurt. Police put the figure at around 180,000. Smaller protests were also planned in other European cities, including Vienna and Salzburg in Austria and Gothenburg and Stockholm in Sweden. In Berlin, demonstrators waved banners reading "STOPP CETA - STOPP TTIP", another placard said "People over profits". The demonstrations are against the Transatlantic Trade and Investment Partnership (TTIP) with the United States and the Comprehensive Economic Trade Agreement (CETA) with Canada, currently being negotiated by the European Union's executive with the respective governments across the Atlantic. Opposition in Europe to the trade deals has risen over the past year, with critics saying the pacts would hand too much power to big multinationals at the expense of consumers and workers by establishing arbitration courts to settle disputes between companies and governments. "HORROR STORIES" EU Trade Commissioner Cecilia Malmstrom defended the planned trade deals and accused the opponents of deliberately heating up the debate with "horror stories and lies". "The idea that TTIP will lower environmental standards is simply not true," Malmstrom told German daily Bild. "Also the assertion that we'll be flooded with genetically modified food is simply wrong. Our democracy of course won't be undermined as some seem to believe." Malmstrom said German exporters would benefit highly from the deals because they would reduce non-tariff barriers to trade. "This helps Germany and creates jobs," she added. German Economy Minister Sigmar Gabriel, who faces crunch CETA vote on Monday by his Social Democrats (SPD), said that the trade agreements were Europe's best chance to shape globalization so that it served people and not only the interests of a few businesses. "If CETA fails, then we'll not have another chance to shape globalization in this way for decades," Gabriel told Bild am Sonntag in an interview published on Saturday. –Reuters