THATTA (92 News) – A terror attempt was on Sunday foiled at Jungshahi railway station near Thatta where a bomb was planted on train tracks. Bahauddin Zakariya Express had been stopped outside the Jungshahi railway station when the bomb was found.The Bomb Disposal Squad has been called in from Hyderabad to defuse the device. Trains have been cleared to run after the station was temporarily closed by the authorities earlier. Earlier, Security forces had foiled a major terror plot by apprehending at least five terrorists of a proscribed organization in Hyderabad. 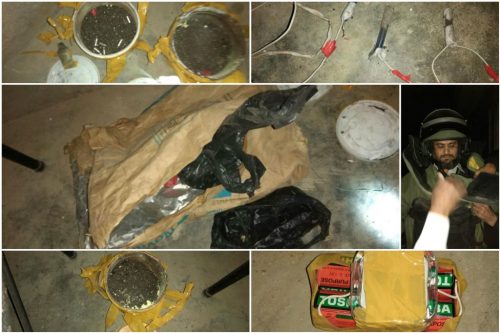 As per details, on a tip off the presence of terrorists in the area, the law-enforcement agencies had carried out a raid at a house located near Hatri Bypass and had arrested five terrorists of a proscribed organization. Weapons and explosive material had recovered from the possession of terrorists. The bomb disposal squad had also diffused at least three bombs containing 15 kilograms of explosive material.The arrested suspects had shifted to undisclosed location for further interrogation.