ANKARA (92 News) – Prime Minister Muhammad Nawaz Sharif has said that the terrorist incidents cannot deter the resolve of the nation against the elimination of terrorism from the country. Talking to media in Ankara on Thursday, he said that the operation against the terrorism has broken the backbone of the terrorists. He said the war against terrorism will continue till the elimination of the last terrorist. The Prime Minister said that the enemy of the country cannot digest the development in the country and therefore they are targeting soft targets. He said the enemy of the country wants to sabotage the development process in Pakistan but they will not succeed in their nefarious designs. To a question, he said that holding of the ECO summit in Pakistan is another success of the country and the confidence of the world. Answering a question, the Prime Minister said that the decisions to call Rangers in Punjab and initiation of operation Radd ul Fasaad were taken at the Prime Minister House, which shows government's determination to eliminate the scourge of terrorism from Pakistani soil. Replying to a question, Nawaz Sharif said that Pakistan wants peace and stability in Afghanistan which is vital for the progress and prosperity for the entire region. Answering a question, the Prime Minister said that Pakistan wants peaceful relations with all neighbours, including India. He said we should not even think that Pakistan and India can hatch conspiracies against each other. To a question, he said Afghanistan's soil should not be used against Pakistan and the Afghan government should take necessary steps in this regard. Earlier  during 5th meeting of the High Level Strategic Cooperation Council of the two countries, co-chaired by Prime Minister Nawaz Sharif and his Turkish counterpart Binali Yildirim in Ankara on Thursday, Pakistan and Turkey also reaffirmed their joint commitment to continue to transform their special relationship into a strong strategic partnership. 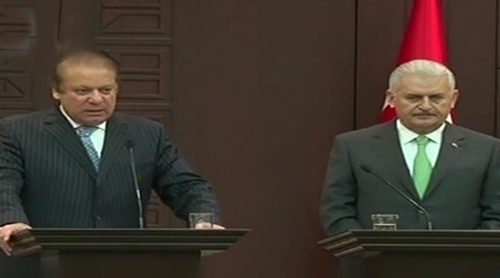 The two sides agreed to forge cooperation in diverse fields including political, economic, defence, investment, energy, development, security, communication, education, culture and tourism. The prime minister expressed the confidence that agreements and Memoranda of Understanding signed today would reinforce the process of taking the relationship to new heights. Nawaz Sharif hoped that the Turkish private sector would take benefit of vast opportunities in Pakistan especially its impressive outlook and focus on regional connectivity, infrastructure development, industry and transport sectors. The Prime Minister pointed out that Pakistan and Turkey are two pivotal states located in strategic regions facing multiple threats and challenges. The Prime Minister said Pakistan remains committed to pursuing cooperative ties with India and Afghanistan as part of its vision of peaceful neighborhood. He said Pakistan and Turkey have shared concern over attempts to link Islam and terrorism and resolved to intensify their joint endeavors to combat growing Islamophobia. The Prime Minister reaffirmed Pakistan's abiding solidarity with Turkey. He particularly reiterated Pakistan's strong condemnation of the heinous coup attempt in Turkey in July last year and lauded Turkish people for their defence of democracy. The Prime Minister emphasized that Turkey's enemies are Pakistan's enemies. Nawaz Sharif said he was certain that Turkey and its leadership would defeat all threats to their security and moves to undermine the economic or designs to change perception. He said terrorism is a common enemy.  Recently, in Pakistan, terrorist targeted Shrine of Lal Shahbaz Qalandar, which is a symbol of progressive thought, peace and love.