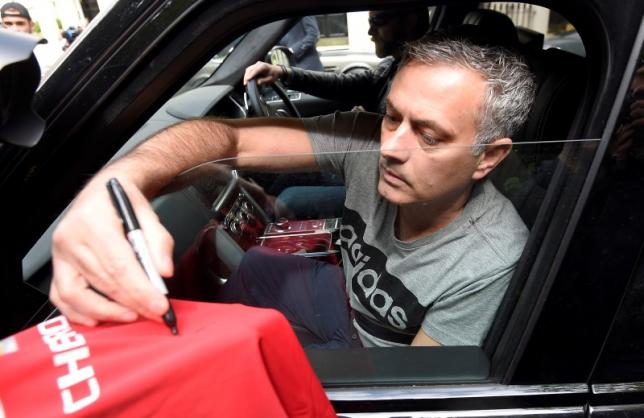 LONDON - Chelsea captain John Terry expects Jose Mourinho to be a success at Manchester United, saying the Portuguese is the right manager to lead the 13-time Premier League champions back into contention for major honours. Mourinho, who was named as Louis van Gaal's successor on Friday, will hope to usher in a return to the glory days the club's fans took for granted until Alex Ferguson ended his trophy-laden 26-year tenure with his retirement in 2013. Terry won eight trophies under Mourinho during the 53-year-old coach's two spells at Stamford Bridge. "It's fantastic news for Manchester United," Terry said at a charity event on Sunday. "I'm sure that United's fans and players will be delighted with that because, as I've said many times before, he's the best manager I've worked under... He'll be great for Manchester United, I'm sure." With a host of highly coveted managers, including Pep Guardiola at Manchester City and Antonio Conte at Chelsea, set to ply their trade in England's top-flight next season, Terry expects exciting times ahead. "I think it's great for English football... Jose and Pep Guardiola up in Manchester, Conte coming to Chelsea," the defender added. "There's real fight amongst the managers who'll be eager to start well so I think it will be interesting times." United midfielder Michael Carrick has urged Mourinho to prioritise results over an attractive style of play despite British media reporting Van Gaal lost his job because of his side's poor quality of football during his two-year reign. "There is going to be change, without doubt. He is coming in and he is his own man, he's got an unbelievable track record. I know there is a lot of talk about styles, but it is about winning," Carrick told British media. "You have to be number one, you have to be winning trophies, and if you can do that with a bit of style and a bit of flair then obviously that's the perfect match but, first and foremost, it is about winning and getting back on top." United missed out on Champions League qualification for the second time in the last three seasons after they finished fifth in the table. However, they did win the FA Cup in Van Gaal's final game in charge, a 2-1 victory over Crystal Palace. -Reuters