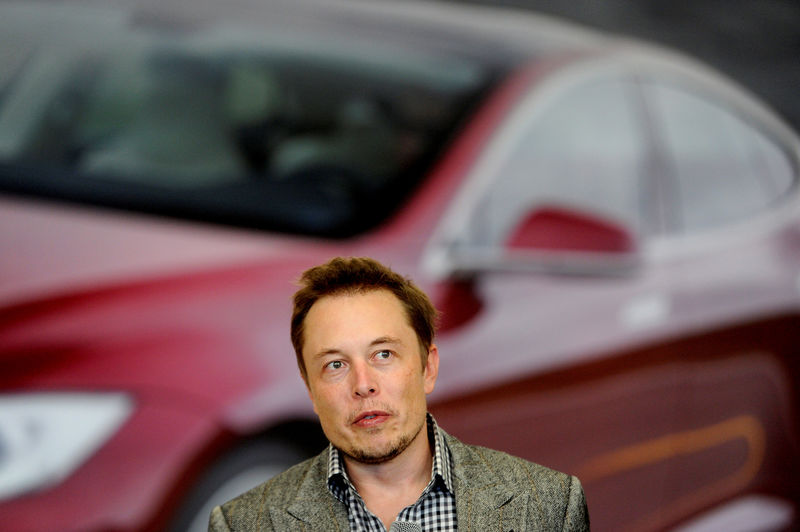 NEW YORK (Reuters) - Tesla Inc’s  Elon Musk on Thursday mocked the US Securities and Exchange Commission, just hours after a federal judge ordered him and the regulator to justify their securities fraud settlement, which let Musk remain chief executive.
“Just want to [sic] that the Shortseller Enrichment Commission is doing incredible work,” Musk, a frequent critic of investors betting against the electric car company, wrote on Twitter. “And the name change is so on point!” The tweet came five days after Musk settled SEC charges that he misled investors in tweets on Aug. 7, including that there was “funding secured” to take his Palo Alto, California-based company private at $420 per share. Musk agreed to pay a $20 million (15.37 million pounds) fine, and step aside as Tesla’s chairman for three years, to settle charges that could have forced his exit from Tesla. The company also accepted a $20 million fine, despite not being charged with fraud. Tesla and the SEC declined requests for comment. Former SEC lawyers questioned the wisdom of Musk’s latest tweet, but said it was unlikely to jeopardize the settlement, which prevents Musk from denying wrongdoing or suggesting that the regulator’s allegations were untrue. “I don’t think the SEC would look at this as a denial of the facts alleged,” said Peter Henning, a law professor at Wayne State University in Detroit. “But you don’t take gratuitous shots at the SEC. There’s no real upside.” Shares of Tesla closed down $12.97, or 4.4 percent, at $281.83, and fell another 2.1 percent to $276 following Musk’s tweet after market hours. The tweet came less than four hours after U.S. District Judge Alison Nathan in Manhattan ordered Musk and the SEC to explain by Oct. 11 in a joint letter why their settlement was fair and reasonable and would not hurt the public interest. Nathan said it was her regular practice to request such letters. “She may want to know why Tesla is paying a fine because the CEO doesn’t know when to shut up,” said Adam Pritchard, a University of Michigan law professor and former SEC lawyer.
Musk’s tweet on Thursday received more than 2,500 responses, with some users questioning the billionaire’s judgment.
“Seriously? You know you still need their help convincing a judge that your penalty was sufficient... Maybe a 420M fine would have been more appropriate?” one Twitter follower said. The proposed take-private price was $420 a share. Musk replied, “the opposite is true.”

The settlement also required Tesla’s board to implement procedures for reviewing Musk’s communications with investors, which include tweets. Thomas Gorman, a partner at Dorsey & Whitney in Washington, D.C., said Musk might argue that the latest tweet might be a mere “personal lament,” and not a violation of the settlement. For her part, Nathan may have limited room to intervene, after a federal appeals court curbed the ability of judges to reject SEC settlements. One such judge was Jed Rakoff, a colleague of Nathan’s who objected to the SEC policy of letting some corporate defendants settle without admitting or denying wrongdoing, as Musk did. But in 2014, the 2nd US Circuit Court of Appeals overturned Rakoff’s rejection of a $285 million SEC settlement with Citigroup Inc, saying he should have given “significant deference” to the regulator. The 2nd Circuit has jurisdiction over Nathan’s court, and lawyers said Musk’s settlement would likely win approval, though orders such as Nathan’s are not too common. “In and of itself it’s not an ominous sign,” said Jordan Thomas, a partner at Labaton Sucharow and former SEC lawyer. “The vast majority of settlements like this are approved by courts.” Pritchard said before Musk’s tweet that he saw no “serious chance” for a rejection of Musk’s settlement, based on 2nd Circuit precedent. “This is just a hoop to be jumped through,” he said. The case is SEC v Musk, U.S. District Court, Southern District of New York, No. 18-08865.