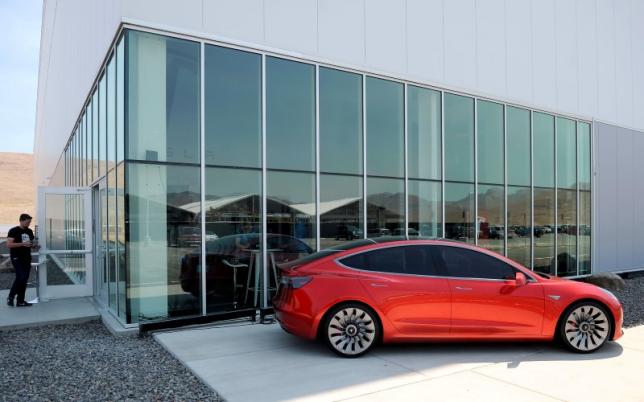 SPARKS - Tesla Motors Inc's next strategic turn could cost the electric car maker "tens of billions" of dollars over the long term, but will likely require only a "modest" capital raise, Chief Executive Elon Musk said. Musk's comments during a media open house at Tesla's sprawling, battery "gigafactory" outside Reno, Nevada, come at a time when the automaker is losing money and dealing with investigations into a crash that killed a driver using its Autopilot driving-assist software. Musk seemed unwilling to let such speed bumps slow him down. Last week he unveiled an ambitious plan to expand the company into electric trucks and buses, as well as car sharing. On Tuesday, Musk said because the plan will roll out over a number of years, it could be mostly funded from sales of vehicles, particularly the Model 3 sedan due to launch in 2017. While some analysts have questioned how profitable the Model 3 will be, Musk on Tuesday said he expects the car to generate $20 billion in revenue per year and $5 billion in gross profit once it is up to full production of about 500,000 vehicles a year. "It's possible to fund quite a bit with that," Musk said, adding that not all the proposed new vehicles will happen simultaneously. Musk said Tesla has finished engineering the Model 3 and he is confident it can launch production next summer. On Tuesday, Musk turned his attention to the $5 billion battery plant being developed with Japan's Panasonic Corp (6752.T). Musk said the factory could ultimately support 1.5 million electric vehicles a year and he was confident the partners could eventually lower battery costs to $100 per kilowatt-hour by 2020. Rival General Motors Co (GM.N) has said it expects to achieve battery costs of $145 per kilowatt hour with the LG Chem batteries used in its $35,000 Chevrolet Bolt. That vehicle is due to launch later this year, nearly a year ahead of Tesla’s similarly priced Model 3. Tesla will release its second quarter results Aug. 3. The company said earlier this month that its deliveries for the quarter fell short of its forecasts. Analysts will be looking for signs that the company is containing its costs and slowing its cash burn. Tesla took another hit June 30 when US highway safety regulators disclosed they were investigating the fatal May 7 crash involving Tesla's Autopilot system, which takes partial control of steering and braking. Musk on Tuesday again defended the technology, describing Autopilot as "unequivocally" a good thing. He said Tesla took a number of steps to "reduce complacency" among Autopilot users. Earlier in the day, the US National Transportation Safety Board said the Tesla involved in the fatal crash was exceeding the 65-mile-per-hour speed limit. Musk's broad new strategy for Tesla outlined last week also calls for combining with solar energy company SolarCity Corp, ramping production of Tesla vehicles to 500,000 a year by 2018 from 80,000 vehicles projected for this year, and expanding Tesla's vehicle product lineup to include pickup and semi trucks. OVERHAUL IN FREMONT PLANT Tesla is also gearing up for a substantial overhaul of its vehicle assembly plant in Fremont, California. Model S sedans and Model X sport utilities are currently built using two separate lines of welding robots. Tesla said earlier in July production, which also fell short of targets in the second quarter, is now averaging about 2,000 vehicles a week. That's still about half the rate of a conventional auto assembly plant. During a tour on Monday, cars went past welding robots on carriers, with one empty carrier between each vehicle. Soon, company officials say, the current models will be built using one line of welding robots, so the other line can be reconfigured to build the Model 3. A new paint shop installed in the plant will be capable of processing 10,000 cars a week. Assembly of the powertrains for Tesla cars will be moved to the Reno gigafactory, Tesla officials said. -Reuters