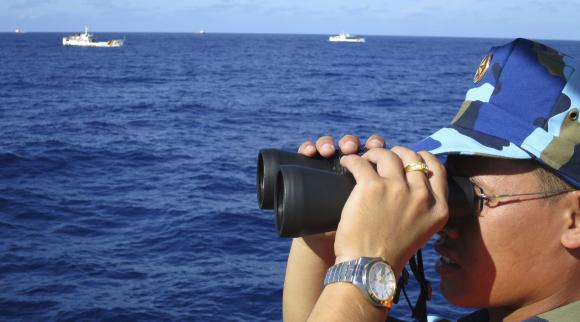 TOKYO - Seventy years after its imperial forces were kicked out of the South China Sea,Japan is quietly moving back into the region, forging security ties with the Philippines and Vietnam as both Southeast Asian nations try to cope with China's territorial ambitions. Tokyo's security cooperation is broad-based: It is supplying maritime patrol boats to the two countries while Japan will hold its first naval exercises with the Philippines in the coming months. Japanese military doctors are even advising Vietnamese submariners on how to deal with decompression sickness. Japan is providing this help, and more, in a calibrated escalation of involvement to avoid a backlash from Beijing, said Japanese sources with knowledge of the assistance. Manila and Hanoi are the two capitals most at odds with Beijing over the South China Sea.Japan itself is embroiled in a bitter row with China over uninhabited islands in the EastChina Sea, further to the north. Tokyo has no territorial claims in the South China Sea, but worries about becoming isolated should China dominate a waterway through which much of Japan's ship-borne trade passes. Japan's assistance follows a speech last May by Prime Minister Shinzo Abe, who said Tokyo would help Southeast Asia maintain freedom of navigation and overflight in the region. The cooperation is also in line with a more muscular security policy advocated by Abe, who wants to loosen the restraints of Japan's pacifist post-war constitution, and dovetails with Washington's "rebalance" toward Asia. "The trend is becoming clear and I don't think they (Japan) are going to back down from it, despite Chinese concerns," said Ian Storey, a regional security expert at Singapore's Institute of South East Asian Studies. In a statement to Reuters, China's Foreign Ministry said it hoped Japan would "speak and act cautiously" over the South China Sea, adding Tokyo was not a party to the dispute. ARTIFICIAL ISLANDS During World War Two, the Imperial Japanese Navy operated submarines from the Spratly archipelago in the heart of the South China Sea. The Spratlys is where China is now creating artificial islands from reefs and atolls so fast that Beijing will be able to extend the range of its navy and air force before long, experts say. Some experts believe the new islands will allow China to create and police an air defense identification zone (ADIZ), where planes would have to identify themselves to Chinese authorities, although Beijing has routinely denied such speculation. China sparked condemnation from Japan and the United States when it imposed an ADIZ above the East China Sea in late 2013. While the militaries from both countries have ignored that zone, it might not be so easy for smaller Southeast Asian nations to do so should one exist in the South China Sea. "An ADIZ would be a catastrophe. It would severely limit air and maritime activity," a senior Japanese policymaker told Reuters on condition of anonymity. NEW BOATS, EXERCISES The planned joint naval exercises off the Philippines are part of a security agreement signed in Tokyo in January, which also outlined regular vice-ministerial defense talks and exchanges of senior officers. The first of 10 coastguard vessels Japan is building for the Philippines will be delivered by the year-end. Japan might also fund infrastructure improvements around a Philippine military base on Palawan Island, one of the closest major land masses to the Spratlys, said a Japanese source with knowledge of the plan. The Philippine armed forces spokesman, Colonel Restituto Padilla, applauded Tokyo's engagement, adding it would be "natural for Japan and the Philippines to join forces to help each other secure these sea lanes". Japan has not gone that far, although Defense Minister Gen Nakatani said last month that a policy of not sending patrol aircraft over the South China Sea might need to be reviewed given the importance of the waterway to Tokyo. Nakatani's comments came after a top US Navy officer said Washington would welcome Japanese air patrols in the region. Vietnam's government did not immediately comment on Japan's assistance, which will include six used navy patrol boats for Hanoi as well as advice on treating decompression illness as Vietnam takes possession of additional sophisticated submarines from Russia. "There are a lot of other things the Vietnamese want," said a Japanese Defense Ministry source without elaborating. Elsewhere, Japanese Defense Ministry officials have held very preliminary talks on joint weapons production with Malaysia and Indonesia, the sources said. Abe has also been drawing closer to Australia. Canberra recently sent a Defense Ministry official to Tokyo to help Japan build ties in Southeast Asia, the Japanese Defense Ministry source said. An Australian defense spokesperson said an official had been posted to the Japanese ministry for 18 months, but did not give details on the person's role. Changes to Japan's defense posture in the coming months will allow Abe to further deepen his involvement in Southeast Asia. For example, Japan is mulling military aid to finance arms sales. – Reuters