Texas bombing suspect kills self, reported to be unemployed man, 23 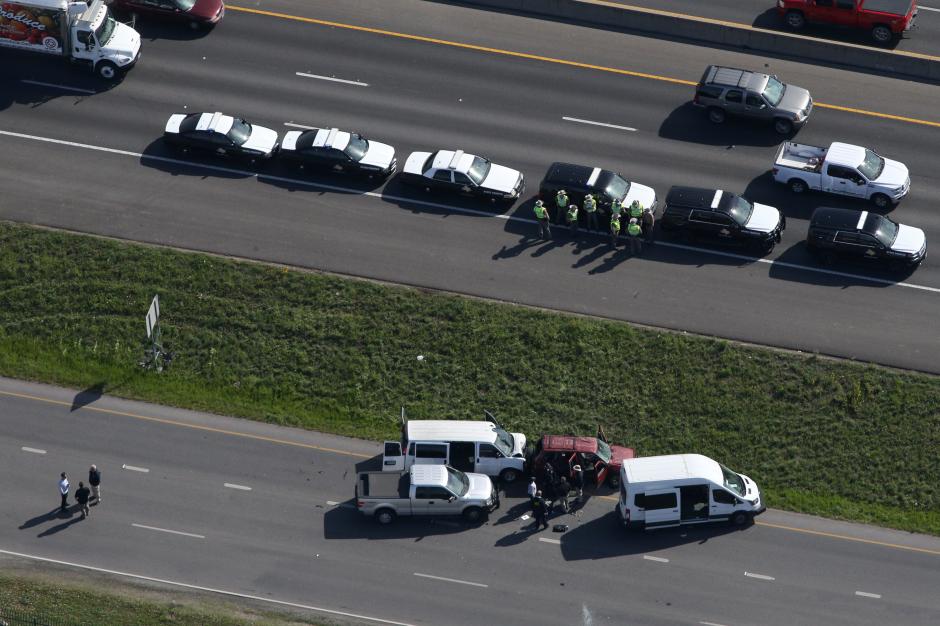 Texas bombing suspect kills self, reported to be unemployed man, 23

PFLUGERVILLE, Texas (Reuters) - An unemployed 23-year-old man suspected of a three-week bombing campaign in Texas that killed two people and injured five others before blowing himself up on the side of a highway was identified by local media on Wednesday.

The suspect was identified as Mark Anthony Conditt of Pflugerville, Texas, according to the local CBS television affiliate and Austin American-Statesman newspaper, citing unnamed law enforcement sources. Reuters could not confirm the suspect’s identity.

Scores of federal, state and local authorities descended on the house where public records showed Conditt lived. On Wednesday afternoon police ordered residents living within five blocks of the structure to evacuate as they continued to search the house.

A series of bombings beginning on March 2 left Austin, a fast-growing city of 1 million people, on edge as the bomber moved from parcels left on doorsteps to one activated by a trip wire to at least two sent via FedEx.

By Sunday, bewildered investigators had publicly asked the serial bomber to reach out to them. By Tuesday they had identified a suspect, Texas Governor Greg Abbott told Fox News.

Police tracked him to a hotel about 20 miles (32 km) north of Austin and were following his vehicle when he pulled to the side of the road and detonated a device, killing himself, Austin Police Chief Brian Manley told reporters near the scene.

“The suspect is deceased and has significant injuries from a blast that occurred from detonating a bomb inside his vehicle,” Manley told reporters. He declined to further identify the suspect, except to say he was white.

Law enforcement officials did not respond to calls seeking to confirm the suspect’s name.

“We’ve known for a couple of days who the suspect likely was,” Abbott told Fox. “Law enforcement is at his house in Pflugerville where we are learning whether or not that was the location he was making his bombs.”

The governor added that the suspect is believed to have lived with two roommates, who are not currently considered suspects, and was not a military veteran.

Public records showed that Conditt lived with his parents, William and Danene Conditt, until 2017, when he moved into a house about a mile (1.6 km) away.

In 2013 Danene Conditt posted a photo of a man she referred to as Mark on Facebook and said she home schooled her children.

“I officially graduated Mark from High School on Friday. 1 down, 3 to go. He has 30 hrs of college credit too, but he’s thinking of taking some time to figure out what he wants to do ... maybe a mission trip,” she said in the photo caption.

Jay Schulze, a 42-year-old network engineer, said he lived a few houses away from the bombing suspect, who with his friends would relax late at night.

“They would be out in back playing music and partying pretty late,” Schulze said.

While jogging on Tuesday night, Schulze noticed a heavy police presence in the area, with drones flying overhead. He said he was stopped briefly by a person who he thought was an FBI agent.

‘DO NOT UNDERSTAND’ MOTIVATION

Manley said the suspect was believed to be responsible for six bombs around Austin and in Schertz, near San Antonio, all but one of which detonated. He said the motivation for the bombings or whether the suspect had help was not yet known.

Manley warned residents to be cautious since it was not clear whether any more bombs had been left around the city.

The first three devices were parcel bombs dropped off in front of homes in the Austin area. A fourth went off on Sunday night, apparently detonated with a trip wire also around Austin, and a fifth exploded inside a FedEx Corp facility in Schertz on Tuesday.

FedEx officials provided “key evidence” that led to the suspect’s identification, the company told employees in an internal memo seen by Reuters on Wednesday.

The first two bombs killed black men, raising fears they were part of a hate crime, but investigators said the blasts that came later and were more random made that less likely.