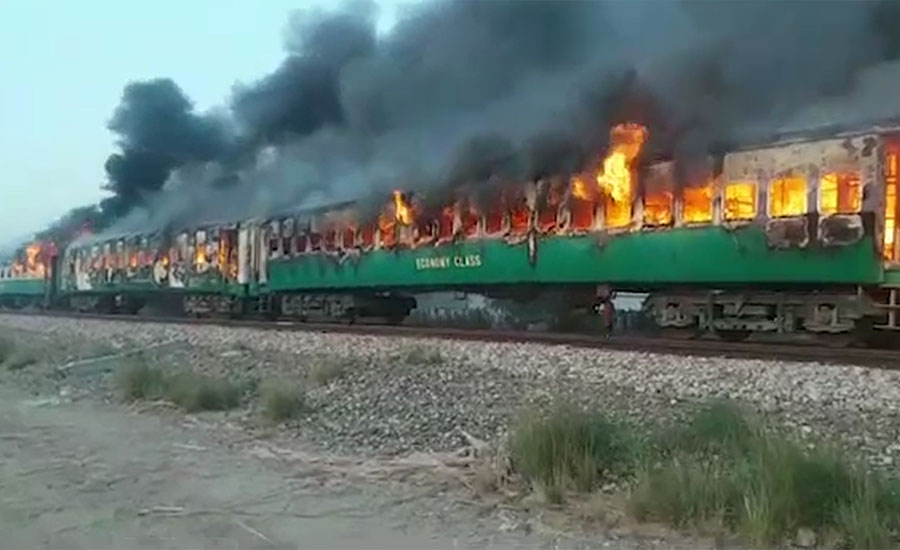 LAHORE (92 News) – The bodies of three more victims, who burnt alive during the Tezgam fire incident, have been handed over to their heirs after their identification through DNA on Thursday. According to the reports, the three victims identified as Ishaq, Umer Jan and Irfanul Haq were identified through DNA. They were handed over to their families in Mirpur Khas. The victims will be laid to rest today after their funeral prayers. It was also reported that 39 bodies related from Mirpur Khas identified till now. On Nov 7, twenty-three victims of the Tezgam tragedy were laid to rest amid sobs in Mirpur Khas. Moving scenes were witnessed during the burial of the deceased. All business centres and markets were closed in mourning. Three members of a family were buried in Kandhkot, while the bodies of three people, including a woman and his son, have been shifted to Karachi. Members of the MQM Rabita Committee, PSP MPA Syed Zulfiqar Ali Shah, Mirpur Khas deputy commissioner and a large number of people from different walks of life also attended the funeral. On November 5, forty-two victims of the Tezgam tragedy were identified.The DNA samples were taken from 57 bodies. During the incident, six people of a family including a couple and their three daughters, were killed in the tragedy. Many families traveled on their own to Rahimyar Khan on Thursday and Friday. They have been informed that the DNA test report will be shared after seven days. The death toll from a massive fire in three bogies of Tezgam Express surged to 75 as one more passenger succumbed to his burn injuries on Saturday. Liaquat Ali, was onboard the ill-fated train when a fire broke out and engulfed three bogies of the train at a glance leaving dozens of people perished. He had suffered critical burn injuries in the inferno and was moved to Nishtar Hospital in Multan. Liaquat was undergoing treatment at the hospital but on Saturday night his health condition worsened and he breathed his last at the hospital, said the sources. On Friday the victims of the Tezgam Express tragedy were laid to rest including seven in Mirpurkhas and six in Umerkot. One more person belonging to Mirpurkhas, Muhammad Liaquat, died during treatment in a hospital in Multan on Saturday. Sobbing family crowded an official building in Mirpurkhas overnight as the first bodies covered in white cloth began arriving by ambulance from the scene of the disaster. It was held at the Bismillah Mosque, from which at least 42 pilgrims had left to board the train one day earlier bound for a religious festival near Lahore.