LONDON (92 News) – The Duke and Duchess of Cambridge have said they are deeply saddened by the loss of life in Tezgam tragedy. Prince William and Kate shared their messages of condolence to the president of Pakistan after it was revealed more than 74 people were killed following the Tezgam tragedy in the south of Punjab Province on Thursday. “Having just returned from visiting Pakistan, we were horrified and deeply saddened to hear about the tragic fire on the Tezgam train near Rahim Yar Khan,” the Duke and Duchess said in a statement.” “Our thoughts and prayers are with all the people and families affected by this heart-breaking disaster.” At least 74 people were killed and 40 more were injured after a gas canister that passengers were using to prepare breakfast exploded, causing a fire that engulfed a train that was passing through the town of Rahim Yar Khan on Thursday morning. Prime Minister Imran Khan said he has ordered an immediate enquiry into the tragedy. William and Catherine carried out a successful diplomatic mission on behalf of the UK Government to Pakistan in which they visited Islamabad, Lahore and the foothills of the Himalayas. They also met Prime Minister Imran Khan. Survivors of the Pakistan fire said it took nearly 20 minutes for the train to stop amid contradictory reports about the condition of the train's brakes. Three carriages were consumed by flames from a fire caused by a cooking gas stove and dozens of people jumped in panic from the speeding train.

The Duke and Duchess of Cambridge have sent a message to the President of Pakistan following the tragic fire on the Tezgam train near Rahim Yar Khan.https://t.co/WJZocOZRCK 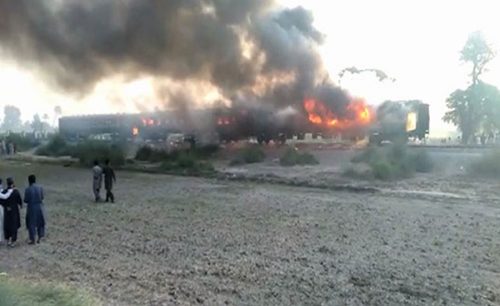