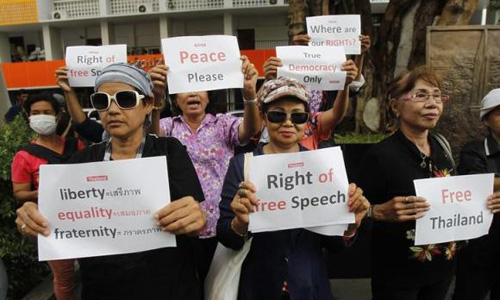 BANGKOK (Reuters) - Thailand's parliament voted overwhelmingly on Thursday in favor of a bill that restricts political demonstrations, something critics fear will be used to smother dissent after martial law is lifted. The law will impose restrictions on the "time, place and manner" of demonstrations but it was not aimed at banning protests, said Colonel Winthai Suvaree, a spokesman for the junta which seized power last year. "This law is not designed to prevent protests. It is aimed at giving order to public gatherings," Winthai told Reuters. The army declared martial law in May, days before it ousted an elected government in a coup. Martial law remains in place despite calls for it to be lifted from tourism industry operators who fear it damages the country's image. Martial law includes a ban on public gatherings of more than five people. The coup followed months of street protests aimed at ousting former Prime Minister Yingluck Shinawatra. Critics say the law on restricting protests that sailed through its first reading on Thursday would help the junta to stifle dissent and maintain its largely unchallenged rule. "This law will replace martial law and control political protests which is an infringement on people's rights," said Thanawut Wichaidit, a spokesman for the pro-Yingluck United Front for Democracy against Dictatorship activist group. The bill must pass a second and third reading for it to come law, which looks likely given its support in the National Legislative Assembly whose members were picked by the military. If the bill becomes law it would ban protests outside courts, parliament and the prime minister's offices, known as Government House, Jate Siratharanont, a member of the assembly, told Reuters. Police would have to be informed of a protest at least 24 hours in advance and gatherings between 6 p.m and 6 a.m would be banned unless protesters got permission, Jate said. But authorities would need permission from the courts to disperse protests. Matthew Smith, executive director of Fortify Rights, a Southeast Asia-based rights group, said it would be difficult for Thailand to argue that the law was in the public interest. "On the contrary, this appears to be a move that's inconsistent with Thailand's human rights obligations," said Smith.