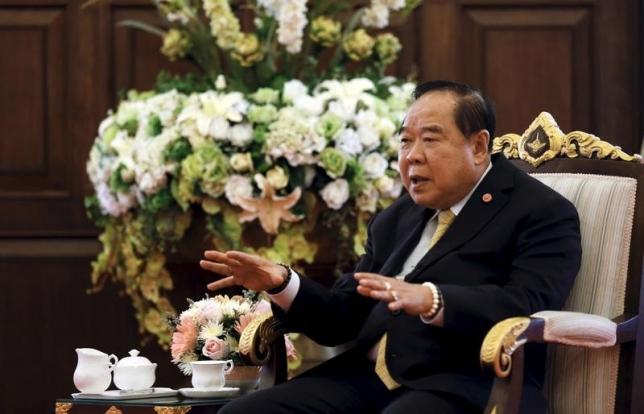 BANGKOK - Thailand will lift a ban this week on overseas travel by some politicians, the defence minister said on Monday, more than two years after the measure was imposed. Over the last few months, Thailand's military government, which took power in a May 2014 coup, has begun easing some of its strict restrictions on political activity, in the runup to an August referendum on a draft constitution. The lifting of the ban showed the junta's trust in politicians, Deputy Prime Minister and Defence Minister Prawit Wongsuwan said. "Politicians who have no legal cases are able to travel," Prawit told reporters. "Whether they go abroad and then take part in political activities is up to them." The lifting takes effect on Wednesday, the junta has said. But it excludes politicians such as former Prime Minister Yingluck Shinawatra, ousted in the coup, who faces criminal charges over alleged corruption in her government's rice subsidy programme. After the army took power in a move it called necessary to restore order after years of political upheaval, the junta banned political activity and ramped up prosecutions under tough sedition and royal defamation laws. The junta, known as the National Council for Peace and Order, summoned hundreds of politicians, activists, journalists and academics for so-called "attitude adjustment" sessions, often at military bases. Many were made to sign agreements not to travel abroad without permission and to halt political activity. They were later released. But the junta has begun easing some curbs ahead of the August vote, which could precede elections in 2017. Hundreds of protesters marked the coup's second anniversary with a march this month, despite a ban on gatherings. Politicians of all stripes welcomed the decision to scrap the ban, but some said it should never have been introduced. "The junta should not have imposed restrictions from the start," Samart Kaewmeechai, a member of the Puea Thai Party that headed the government toppled in 2014, told Reuters. -Reuters