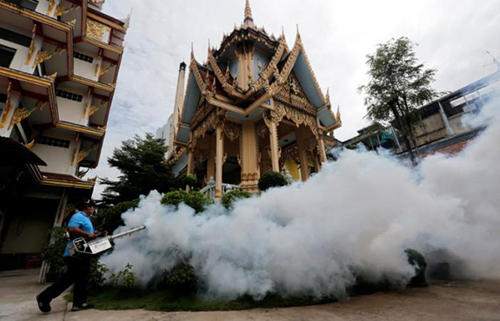 BANGKOK – Thailand reported on Friday the first confirmed cases in Southeast Asia of microcephaly linked to mosquito-borne Zika, as the World Health Organization urged action against the virus across the region. The confirmation of two case of microcephaly, a birth defect marked by small head size, came a day after U.S. health officials recommended that pregnant women postpone non-essential travel to 11 Southeast Asian countries because of the risk of Zika. "We have found two cases of small heads linked to Zika, the first cases in Thailand," Prasert Thongcharoen, an adviser to the Department of Disease Control, told reporters in Bangkok. He declined to say where in Thailand the cases were found but officials have said they were not in Bangkok. The World Health Organisation (WHO) said the cases were the first of Zika-linked microcephaly in Southeast Asia and the virus infection represented a serious threat to pregnant women and their unborn children. "Countries across the region must continue to strengthen measures aimed at preventing, detecting and responding to Zika virus transmission," Dr Poonam Khetrapal Singh, the WHO's regional director, said in a statement. U.S. health officials have concluded that Zika infections in pregnant women can cause microcephaly, which can lead to severe developmental problems in babies. VIRUS SPREADING The connection between Zika and microcephaly first came to light last year in Brazil, which has confirmed more than 1,800 cases of microcephaly that it considers to be related to Zika infections in the mothers. Zika has spread extensively in Latin American and the Caribbean over the past year or so, and more recently it has been cropping up in Southeast Asia. Thailand has confirmed 349 Zika cases since January, including 33 pregnant women, and Singapore has recorded 393 Zika cases, including 16 pregnant women. Some health experts have accused Thai officials of playing down the risk of Zika to protect its thriving tourist industry, but Prasert dismissed that. "Thailand is not hiding anything and is ready to disclose everything," he said, adding that other countries in Southeast Asia might also have cases of Zika-linked microcephaly that they have not disclosed. The WHO said Thailand's response was an example for the region. "Thailand's diligence underscores the commitment of health authorities to the health and wellbeing of the Thai public, and provides a positive example to be emulated," Singh said. The U.S. Centers for Disease Control and Prevention (CDC) said on Thursday people should consider postponing travel to Brunei, Myanmar, Cambodia, Indonesia, Laos, Malaysia, Maldives, Philippines, Thailand, Timor-Leste (East Timor), and Vietnam. The CDC has already issued a "travel notice" for Singapore, and said such a warning would be considered for the new countries if the number of cases rose to the level of an outbreak. Thailand's confirmation of Zika-linked microcephaly comes ahead of China's week-long "Golden Week" holiday with Thailand expecting 220,000 Chinese visitors, up from 168,000 for the week in 2015, Tourism Authority of Thailand governor Yuthasak Supasorn told Reuters. NO VACCINE There is no vaccine or treatment for Zika. An estimated 80 percent of people infected have no symptoms, making it difficult for pregnant women to know whether they have been infected. There are also no specific tests to determine if a baby will be born with microcephaly, but ultrasound scans in the third trimester of pregnancy can identify the problem, according to the WHO. Zika is commonly transmitted through mosquitoes but can also be transmitted sexually. Another Thai health ministry adviser urged everyone to work to stop the spread of mosquitoes but said people should not panic. "Don't have sex with a Zika-infected person. If you don't know if they are infected, then use a condom," the adviser, Pornthep Siriwanarangsan, told reporters. "We can't stop women from becoming pregnant ... but we mustn't panic." Health authorities in the region said they were stepping up monitoring, but there has been little testing and officials said the real number of cases was bound to be higher than the confirmed figure. "We do not test everybody, we test only those who are symptomatic," said Paulyn Jean Rosell-Ubia, health secretary in the Philippines, which has reported 12 Zika cases. "Yes, we are positive that the number is higher because we are not testing everyone." Malaysia, which has reported six cases of Zika, including two in pregnant women, said it would seek information from Thailand on the particular strain of the Zika virus there. "We are taking serious notice of the reports in Thailand, and we will reach out to the Thai authorities for more information ... so that we can be more prepared," Malaysia's health minister, Subramaniam Sathasivam, told Reuters. Authorities in Vietnam, which has reported three cases of Zika, ordered stepped up monitoring of pregnant women. In Indonesia's capital, Jakarta, head of disease outbreak and surveillance Dwi Oktavia said there had been no sign of any increase in birth defects there. Indonesia had one Zika case in 2015 but has confirmed none since then. Microcephaly in babies can lead to respiratory problems related to malformation of the brain, a serious threat to the lives of babies. Children with microcephaly face lifelong difficulties, including intellectual impairment. Zika was first identified in Uganda in 1947 and first isolated in Asia in the 1960s. It was unknown in the Americas until 2014. – Reuters