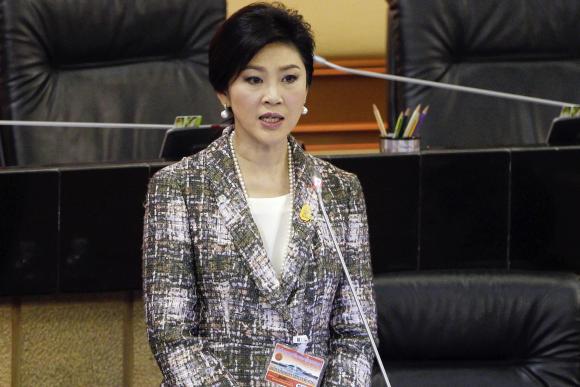 BANGKOK (Reuters) - Thailand's attorney general filed charges against deposed prime minister Yingluck Shinawatra on Thursday, in a case that could result in a 10-year jail term if she is found guilty. Yingluck, Thailand's first woman prime minister, was charged with negligence for her role in a rice subsidy scheme that has cost the state billions of dollars. She denies wrongdoing. The Supreme Court would decide by March 19 whether or not to pursue the case, court secretary Theerathai Charoenwong said. Yingluck was forced from office last May over a separate legal challenge days before her government was ousted in a military coup. The coup ended months of protests organized by supporters of the establishment opposed to her government's populist polices including the rice subsidy. Yingluck was not obliged to appear on Thursday but would be ready to report to the court if the case proceeds, her lawyer, Norawit Laleng, said. The government denied Yingluck permission to travel to Hong Kong this month to ensure she was in the country to face charges. The prosecutor submitted 20 boxes of documents related to the case in the court, Kosonwat Inthujanyong, deputy spokesman for the Office of the Attorney General, told reporters. Yingluck is the younger sister of former Prime Minister Thaksin Shinawatra, a telecommunications tycoon who shook up the political system with policies favoring the rural poor when he became prime minister for the first time in 2001. The charges against Yingluck represent the latest stage in a 10-year struggle between Thaksin, who was overthrown in a 2006 coup and has lived abroad since 2008 to avoid jail for a graft conviction he says was politically motivated, and the royalist-military establishment. He or his allies, including Yingluck, have won every election since 2001, to the dismay of the establishment which sees him as threat, although pro-Thaksin governments have only served one full term because of court decisions or military intervention. A military-stacked legislature in January found Yingluck guilty of dereliction of duty in relation to the rice scheme, in a retroactive impeachment that carries a five-year ban from office. The Office of the Attorney General on the same day announced it planned to file charges against her. Yingluck's critics say the rice scheme was an effort to buy votes. Supporters of the Shinawatras say the charges against her are aimed at ending Thaksin's influence. Army rule has brought stability but the junta's national reconciliation plan has failed to narrow political divisions. An election will be held early next year, the government says.