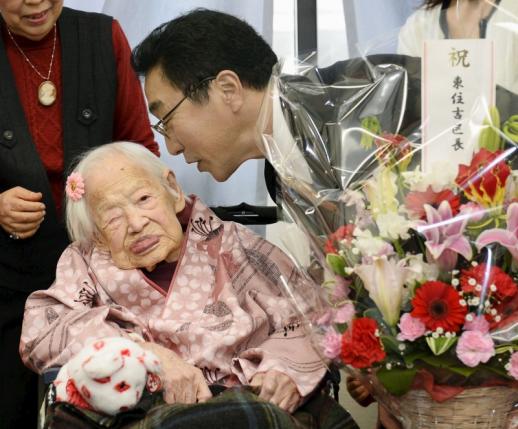 TOKYO – Misao Okawa, a Japanese woman recognized as the world's oldest person who credited her longevity to "eating delicious things" and getting plenty of rest, died at the age of 117 on Wednesday, Japanese media reported. Okawa, the daughter of a cloth merchant in the western city of Osaka, was born in 1898 - the year that the United States annexed the Hawaiian islands and a new drink named Pepsi-Cola was launched. She shared her birth date with Chinese revolutionary leader Zhou Enlai. Well enough to enjoy cake at a birthday party on March 5, Okawa gradually lost her appetite and died early on Wednesday surrounded by her grandchildren, Japanese media said. She was recognized by the Guinness Book of World Records as the world's oldest person in June 2013 when Jiroemon Kimura, also from Japan, died at the age of 116 years and 54 days. The world's oldest person is now Gertrude Weaver of the United States, who will turn 117 on July 4. –Reuters