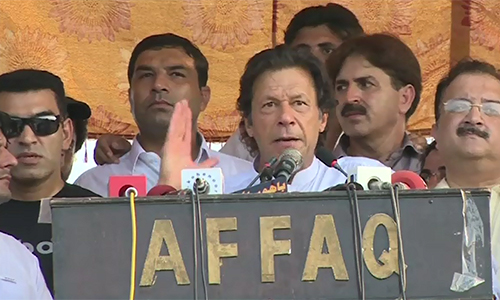 HARIPUR (92 News) – PTI chairman Imran Khan has said that there is no one in the country to listen to the weak and victims. Addressing an electoral meeting in Haripur on Monday, he said that being a Pakistani, he was ashamed of the Kasur incident. He said that the Punjab police had tortured the victims instead of providing them justice. Criticizing the Punjab government, he said that the government was forcing the police to do wrong acts. “The victims’ parents are being pressurized to reconcile. The ministers are giving a wrong touch to the incident,” he alleged. The PTI chairman said that the Sharif family had become billionaire after coming to power, but the NAB never arrested them. “The N-League awards tickets to the culprits and these culprits make money after coming to power,” he said.