There is Qabza mafia, not dictatorship in PTI, says Justice (retd) Wajihuddin 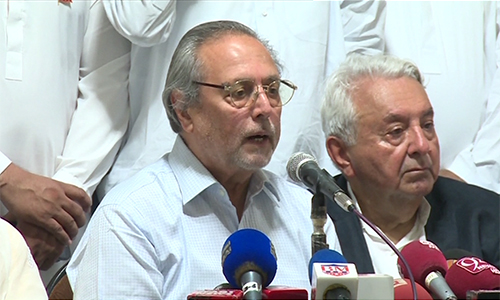 There is Qabza mafia, not dictatorship in PTI, says Justice (retd) Wajihuddin

LAHORE (92 News) – PTI suspended leader Justice (retd) Wajihuddin has said that there is a Qabza mafia, but not dictatorship in the Pakistan Tehreek-e-Insaf. Addressing a press conference at Lahore Press Club on Friday, he alleged that tickets were sold during the Cantonment Board elections. “Workers have no access to the leadership. The estranged members have formed a National Ideology Council,” he said. Justice (retd) Wajihuddin said that Khyber Pakhtunkhwa Chief Minister Pervaiz Khattak, Jahangir Tareen, Aleem Khan and Nadir Leghari were the fake coins of the party and there would be no change in the party unless they were in the party. “Imran Khan is Mr clean. Qabza group has taken the party hostage. The PTI will become like other parties if steps were not taken,” he said. He demanded that another person should be made the Khyber Pakhtunkhwa chief minister after removing Pervaiz Khattak. Wajihudding said that some people say that they are making a separate party, but they were not doing such thing. “The heart and mind of Hamid Khan are with us, but we do not want his sacrifice,” he said. He said that merit was violated while awarding tickets in the elections. “The PTI lost the elections due to this reason,” he claimed.