There should be no laxity in rehabilitation of quake victims, says Prime Minister Nawaz Sharif

There should be no laxity in rehabilitation of quake victims, says Prime Minister Nawaz Sharif

TIMERGARA/KHAR (92 News) – Prime Minister Nawaz Sharif has said that there should be no laxity in the rehabilitation of the earthquake victims. He was addressing the quake affected people on Monday. He said that they want to protect the affected people from difficulties before the winter. Prime Minister Nawaz Sharif vowed to ensure fast track payment of compensation to the quake victims to mitigate their sufferings. Deploring the loss of precious lives in the calamity, the prime minister said that the relief package prepared in consultation with the Khyber Pakhtunkhwa government is aimed at reducing the sufferings of the affected families. He said that the victims have also been provided with tents, blankets and ration. He appreciated the Khyber Pakhtunkhwa government and Pakistan Army for timely completing the survey of fully damaged and partially damaged houses. “I will again visit the areas following the reconstruction of damaged houses.” Later, the prime minister distributed compensation cheques among the quake-hit people of Timergara. 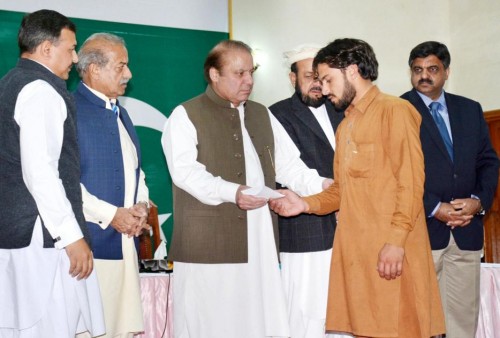 Earlier, he was given a detailed briefing on the damages caused by the calamity in the area and the relief activities. Addressing the quake victims in Khar tehsil of Bajaur Agency, Prime Minister Nawaz Sharif said the government stands shoulder to shoulder with the affected people in this hour of trial. “It is our foremost priority to rehabilitate the victims and bring normalcy in their lives at the earliest,” he said.