'There was no fear at all' – Hafeez on magnificent comeback

'There was no fear at all' – Hafeez on magnificent comeback

DUBAI (92 News) – Mohammad Hafeez, 37, hit a superb 126 on his Test return against Australia following a two-year hiatus from the format, but reflecting on his comeback, he insisted that he had 'no fear' about re-entering to the fold.
He and Imam ul-Haq (76) put on a mammoth opening stand of 201 as Australia slaved away in the Dubai heat, the visiting side remaining wicketless in both the morning and afternoon sessions. Despite losing three wickets in the evening, Pakistan had asserted their authority on the match, and having amassed 255/3 at stumps, they have now provided themselves with a great foundation to mount a big total. Hafeez, who recorded his 10th Test ton, and his first in Dubai, was delighted to have contributed with the bat after a long time out of the side. "I’m so happy. I tried my level best in the last couple of years to try and get back in this format, and I’m so happy to get a chance in this team after a long, long time waiting for that. I’m really happy to do something good for the team," he said upon the conclusion of the day's play. "I’m really happy to do my first hundred in Dubai, because in Dubai I never scored any hundreds so I was very happy to score that." Despite his lengthy absence from the Test setup, Hafeez was keen to point out that 'fear' was not an issue due to his and the team's preparations. "There was no fear at all, because whatever it is it is and I really back myself. I know whenever it is the right time I will perform and I will get back into the Pakistan team. I’m really happy to get back into the team and perform," he remarked. 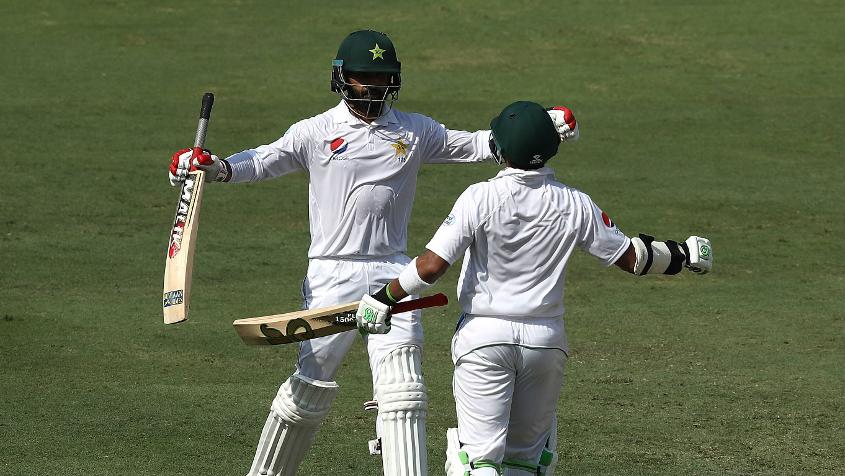 "There was no fear, because I prepared myself very well. The whole team has really given me lots of confidence during the practice sessions we had together and that feeling encouraged me a lot and obviously as a senior player I wanted to do well in this Test series." Australia's triple-strike pegged back Pakistan somewhat as runs dried up towards the end of the day's play, but Hafeez was confident that his side can pile on more runs and bring their slow bowlers into play as the match wears on. Yasir Shah is a proven threat at Test level, while debutant Bilal Asif offers the home team some depth in the tweaking department. "We are still happy as a team because (we have) 250 on the board and still if we can manage to get 200 more runs on the board in the first innings then we will have a better chance to bowl with our spinners, because we know Yasir Shah is a match-winner in these conditions, and we have a debutant, but he is a wonderful bowler, in Bilal Asif," said Hafeez. "So we really back ourselves to get 450 on the board in the first innings, and then we have all the time to put pressure on the Australian batsmen." He was also quick to laud the exploits of his opening partner, Imam, who with Hafeez, did well to negotiate some more testing conditions early on to reach the lunch break unscathed.

"The pitch was getting a little bit slow. Early on there was more moisture on it, but I think we managed it very well. Imamul Haq played an exceptionally good knock, giving me lots of confidence from the other end."