SYDNEY (92 News) - Sophie Molineux and Georgia Wareham impressed with the ball on their one-day international debuts as Australia beat Pakistan by five wickets in their first exchange.

Australia are the top team in both ODIs and Twenty20 Internationals in the MRF Tyres ICC Women’s Team Rankings, while Pakistan are seventh on both tables. The gulf showed as Pakistan were bowled out for 95 in the ICC Women’s Championship game at Kuala Lumpur’s Kinrara Oval on Thursday, 18 October, and Australia chased the runs down in 22.2 overs. The Pakistan batters never quite got going after opting to bat. Megan Schutt returned 3/17, and was later named the Player of the Match. But equally impressive were the two new bowlers in the XI: Molineux and Wareham. Wareham, the right-arm medium pacer, picked up 2/22 from five overs, while left-arm spinner Molineux had 1/9 from seven overs. Them aside, Nicola Carey, the 25-year-old right-arm pacer in just her fourth ODI, was on target with 3/19 too. “It was beautiful – they’re two people who genuinely deserved (their ODI caps). In the trial match the other day, they showed what they could do and they did well today, they don’t show any nerves at all,” said Schutt after the game. “I thought we bowled pretty well, to be honest. It was a pretty skiddy wicket and we adapted to that and kept it to a low total. I think attacking the stumps was pretty important, obviously the whole mentality of ‘they miss you hit’ is pretty crucial on wickets like this.” Schutt has been the spearhead of the Australian bowling attack in recent times, and added to her reputation at an opportune time, with the ICC Women’s World T20 2018 around the corner. 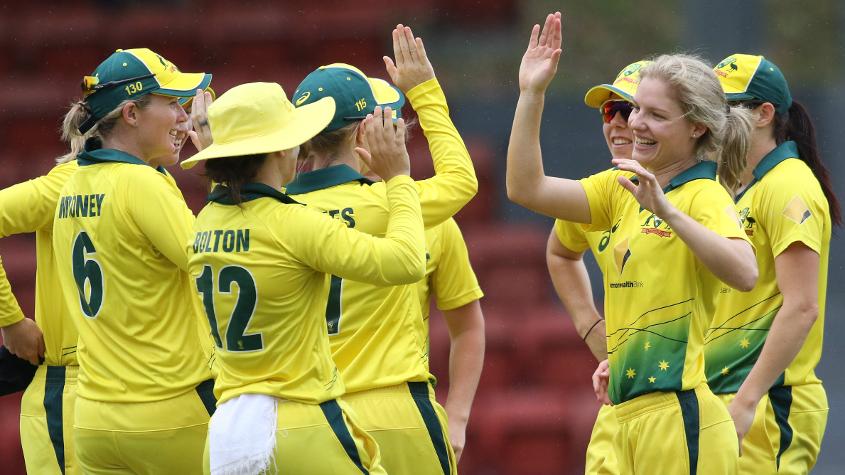 Asked about her success of late, she said, “I don’t know, but it’s a bit to do with confidence and also knowing my role. They (the management) are pretty clear on what our roles are for all of us and having that coming into a match is something you can feel pretty confident with.” Playing for the first time at Kinrara Oval, “I didn’t change my plan too much,” she said. “I try to be as attacking at the stumps I can and tried to use my swing. There was a little bit of that there for me today early so that worked in my favour."