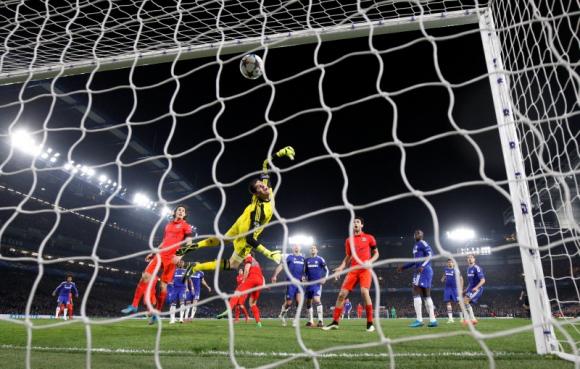 LONDON - Thiago Silva's extra-time header sent Paris St Germain into the Champions League quarter-finals on away goals after they overcame the early sending-off of talisman Zlatan Ibrahimovic to secure a brave 2-2 draw with Chelsea on Wednesday. PSG, who had striker Ibrahimovic dismissed after 31 minutes, went through after the two sides battled to a 3-3 draw over the two legs of their last-16 tie. The deciding goal was headed home in the 114th minute by Silva, who redeemed himself after he had given away the penalty nine minutes earlier that put Chelsea 2-1 ahead by handling a high cross. Eden Hazard coolly converted that spot kick in the 95th minute which looked like settling a fiery tie that threatened to boil over several times, but also had plenty of good football. The pendulum seemed to swing Chelsea's way when Ibrahimovic saw red for a clumsy challenge on Chelsea midfielder Oscar, but the visitors never gave up the fight against the side that knocked them out at the quarter-final stage last year. They came storming back after Gary Cahill gave Chelsea the lead when he lashed home after 81 minutes and their never-say-die attitude was rewarded with four minutes of normal time to go. Former Chelsea defender David Luiz scored with a powerful header from a corner that flew in off the underside of the bar to make it 1-1 on the night and force extra time. ELECTRIFYING START The French side should have taken the lead after 58 minutes when Edinson Cavani rounded goalkeeper Thibaut Courtois, but he hit the inside of the near post with his shot. Despite an electrifying start to the match that included an attempt from Cavani after two minutes, and end-to-end play, neither team actually had an effort on target in the first half. Yet the football both were producing was ruggedly entertaining with Chelsea's Hazard creating opportunities for his front men which they could not capitalise on. PSG were faster to almost every ball and dominated possession but Chelsea were never seriously troubled and Ibrahimovic had a forgettable 30 minutes before departing. Costa was unlucky not to win a first-half penalty after a mazy run through the Chelsea defence ended when he appeared to be tripped by Cavani. At the end, it was PSG's fans left celebrating a famous success as Chelsea lost to a French side for the first time in a Champions League encounter. – Reuters