Thirty years on, stars revel in 'The Breakfast Club' legacy 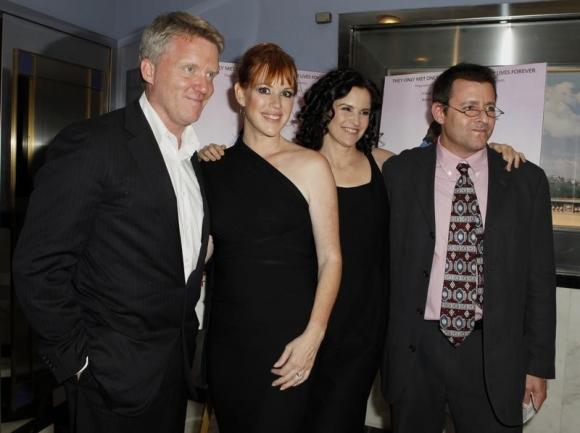 Thirty years on, stars revel in 'The Breakfast Club' legacy

AUSTIN - Thirty years after five misfits entered high school detention and defined the archetype for the modern teen movie, actresses Molly Ringwald and Ally Sheedy reflected on the unexpected impact of John Hughes's "The Breakfast Club." "Nobody's really managed to make a movie, I think, as good as what this movie was for the time," said Ringwald, who became Hollywood's teen queen after the film was released in 1985. "Until something comes along to replace it, I think it's firmly entrenched in movie classic history," she told Reuters. Ringwald, 47, and Sheedy, 52, reunited on Monday for a screening to celebrate the movie's 30th anniversary at the annual South by Southwest (SXSW) festival in Austin, Texas, where the film, technology and music worlds converge. "The Breakfast Club" saw Ringwald play the high school princess, Sheedy the resident "basket case", Judd Nelson as the criminal burnout, Emilio Estevez as the jock and Anthony Michael Hall as the nerd, who are forced together one Saturday in high school detention. They initially clash and then slowly bond over their underlying commonalities, and the revelation that they are not defined solely by the box they are placed in. The Universal Pictures film grossed $38 million at the U.S. box office and became one of the biggest hits directed by Hughes. The five actors quickly became known as the 'Brat Pack,' inspiring character types mimicked throughout the teen movie genre, from 1995's "Clueless" to 2004's "Mean Girls." "I don't think we had any idea that it was going to have this kind of longevity and resonate," Sheedy said. Ringwald said she did not recommend that a classic movie such as "The Breakfast Club" be remade for today's teen audience. But if it were to inspire a new interpretation, she said, "I think that it would have to be a lot more diverse. Especially since the message is that we're all outsiders, we're all different." Andrew Meyer, the film's executive producer, said "The Breakfast Club" was unlikely to happen in today's technology-saturated world where teens would be on smart phones and social media rather than talking to each other directly. Sheedy said today's teens are also "really sophisticated," "more open-minded" and a "bit more politically aware." "There is an innocence about 'The Breakfast Club' that I think is maybe not quite there anymore for high school kids," she said. - Reuters