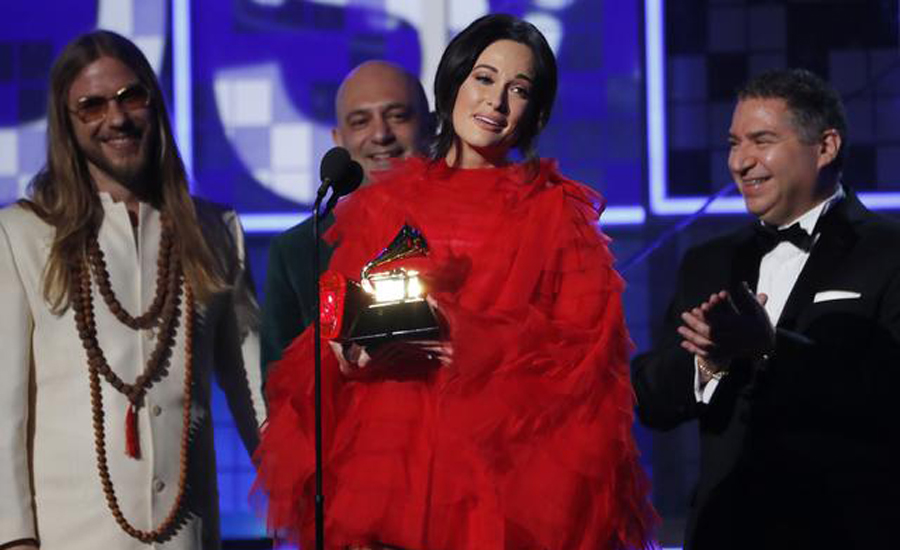 LOS ANGELES (Reuters) - Country artist Kacey Musgraves won album of the year for “Golden Hour”, while “This is America” by Childish Gambino won both record and song of the year at the 61st Grammy Awards on Sunday in a breakthrough for rap at the most prestigious honors in the music business. British pop singer Dua Lipa was named best new artist and popular rapper Cardi B won her first Grammy, taking best rap album for “Invasion of Privacy.” Gambino’s searing “This is America,” about police brutality and racism, became the first hip-hop track to win record and song of the year Grammys, while Drake made a surprise appearance to accept the Grammy for best rap song for “God’s Plan” and Lady Gaga won three trophies. “This is America” also took Grammys for best music video and best rap performance. Before Sunday the Grammys had frequently shut out hip-hop artists from its top prizes, despite rap’s dominance as the biggest music genre in the United States. Only two albums by hip-hop artists have ever won the album of the year Grammy - Lauryn Hill’s “The Miseducation of Lauryn Hill” in 1999, and Outkast’s “Speakerboxxx/The Love Below” in 2004. Musgraves also won for best country album, song and country solo performance. This year’s Grammy nominees were dominated by women and the awards show, hosted by Alicia Keys, reflected that with rousing performances by Lady Gaga, Cardi B, Jennifer Lopez, Diana Ross, Dolly Parton, Miley Cyrus, Janelle Monae, Katy Perry and Musgraves.