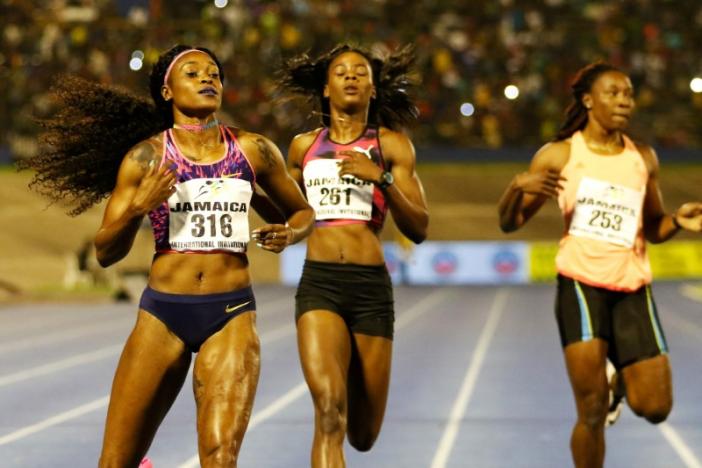 Thompson, the fifth fastest woman over the distance with 21.66, took control of the race coming off the bend, created some separation, then cruised to the finish line ahead of Shericka Jackson and American Shalonda Solomon.

Americans Tori Bowie and Deajah Stevens have also both clocked 22.09 this year.

"My race plan was to get off the corner as early as possible and then control my race and take it from there," the 24-year-old Jamaican told Reuters. "It's all about winning and perfecting the technique and execution.

"This is just a preparation for a bigger and better year heading into London."

Canada's Olympic silver medallist Andre De Grasse also looked to be doing it easy when he won the men's 200 in 20.14 after an explosive first 80 metres.

"I just tried to run a fast 150 and then hold on," said De Grasse, who told Reuters he had been battling some injury concerns. "I'm just trying to come back into form, get my fitness right and get ready for the rest of the season.

"But now I'm feeling good and I'm ready to run."

Jamaica's Yohan Blake won the men's 100 in 9.93 after he took control of the race after 40 metres and pulled away from the American pair of Ronnie Baker, who took second in 9.98 and Mike Rodgers, who clocked 10.02.

"It's always good to start off the season with a 9.93," Blake said. "I'm feeling really good ... and it gives me great confidence going forward and a time to aim for at the London world championships."

American Morolake Akinosun won the women's 100 in a photo finish ahead of Trinidad and Tobago's Michelle Lee-Ahye. Both were credited with a time of 11.06. Allyson Felix was third in a season best 11.07.

Kyron McMaster of the British Virgin Islands also logged a world leading time of 47.80 to win the men's 400 hurdles. -Reuters