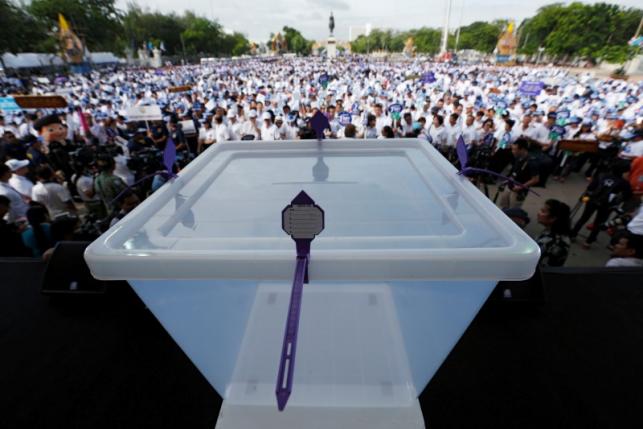 BANGKOK - Around 3,000 students, civil servants and military cadets gathered in Bangkok on Thursday in a final push to urge Thais to vote in a crucial constitutional referendum at the weekend that aims to subdue political parties. Thais will decide on Sunday whether to accept a military-backed constitution in the biggest test of public opinion since the military took power in a May 2014 coup, a vote that could give the generals a permanent role in overseeing Thailand's economic development. Crowds gathered at the Royal Plaza near Bangkok's Government House as cars bearing banners urging Thais to cast their vote set out to drive around the Thai capital. Thailand's two biggest political parties oppose the constitution because they say provisions in the charter are designed to ensure long-term military supervision of Thai politics. The ruling junta, known as the National Council for Peace and Order, has said it wants to hand power back and return Thailand to democracy. It says the constitution is designed to end more than a decade of divisive politics in Thailand, which has a long history of coups, and ensure politicians put people's interests first. However, Reuters interviews with senior military officers belie those claims and show that the military's ambitions is to make future coups unnecessary by weakening political parties. Under the proposed charter, which would replace one torn up following the May 2014 coup, a junta-appointed Senate with seats reserved for military commanders would check the powers of elected lawmakers. The junta has promised a general election in 2017 if the constitution is approved. A no vote could usher in more political uncertainty for Thailand and Prime Minister Prayuth Chan-ocha, who is also junta leader, has said he will come up with another charter. Referendum rules issued in May ban anyone from campaigning for either side of the vote, so at the Royal Plaza some carried more neutral signs that said: "On August 7, vote in the referendum." "Today we will have convoys around Bangkok ... to urge as many Thais as possible to come out and vote on Sunday," said Supachai Somcharoen, chairman of the Election Commission. "This is the big day." Some 50 million Thais are eligible to cast their votes in the referendum and the Election Commission has said it expects an 80 percent turnout. Despite the campaigning ban, the junta has broadcast songs and television programmes to drum up support for the referendum. "Everyone in the country ... must come out to exercise their right to vote," said Supachai. -Reuters