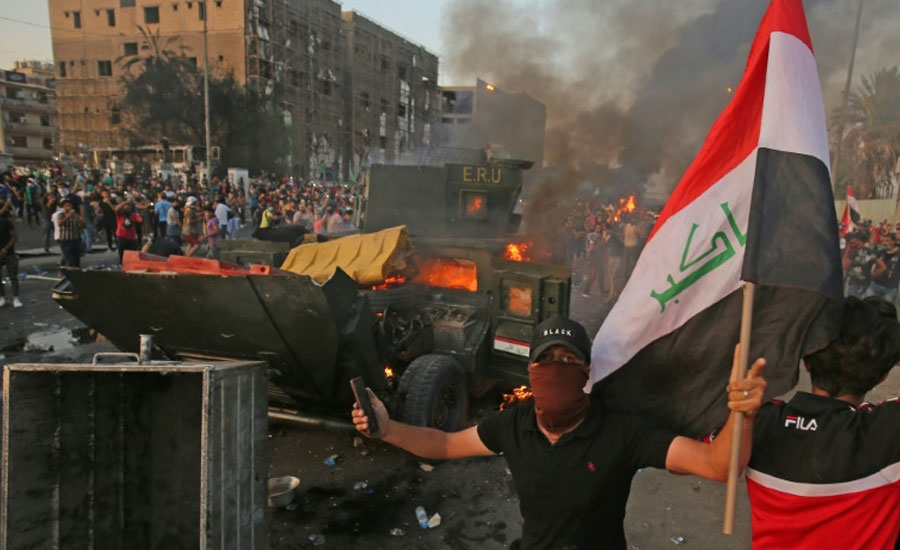 BAGHDAD (AFP) - Thousands of protesters clashed with riot police in Iraq's capital and across the south on Thursday, the third day of mass rallies that have left 31 dead. Defying curfews, tear gas and live rounds, truckfuls of demonstrators gathered to vent anger over corruption, unemployment and poor services in the biggest challenge yet to Prime Minister Adel Abdel Mahdi. In his first public address since protests began, the embattled premier made a televised speech early Friday as heavy gunfire rang out across Baghdad. He described recent events as "the destruction of the state, the entire state", but refrained from directly responding to the protesters´ demands. Instead Abdel Mahdi defended his government´s achievements and pledged a monthly stipend for families in need, while asking for time to implement a reform agenda promised last year. Until now the leader has preferred to communicate by written statement, even as state media said he had met with unnamed protest leaders. Hours earlier in Baghdad crowds swelled around the ministry for oil and industry, with demonstrators vowing to march to the capital´s emblematic Tahrir Square. “We´ll keep going until the government falls,” said 22-year-old Ali, an unemployed university graduate. “I´ve got nothing but 250 lira ($0.20) in my pocket while government officials have millions," he told AFP. Most demonstrators carried the Iraqi flag while others held banners bearing the name of Hussein, a revered figure in Shiite Islam. Police and army troops used automatic weapons mounted on military vehicles to fire at the ground, the bullets ricocheting into the crowd. Wounded protesters piled into small tuk-tuks to reach hospitals. "Why do the police shoot at Iraqis like them? They suffer like us -- they should help and protect us," said protester Abu Jaafar. The demonstrations have left 31 people dead, including two police officers, and more than 1,000 people have been wounded.

Protests began Tuesday in Baghdad and spread across the mainly Shiite south. Several cities have imposed curfews but protesters have flooded the streets regardless. Meanwhile the Kurdish northern regions and Sunni western provinces have remained relatively calm. The grievances echo those of mass demonstrations in Iraq´s south just over a year ago, prompted by a severe water shortage that caused a health crisis. Since then, southern provinces have accused the central government of failing to address profound infrastructural gaps. In particular, anger has boiled over at the staggering level of youth unemployment, which is around 25 percent or double the overall rate, according to the World Bank. Tensions have been exacerbated by the closure of government offices and calls by firebrand cleric Moqtada al-Sadr for "a general strike". Sadr was behind major protests in Baghdad in 2016 when his supporters stormed the city´s Green Zone, home to some ministries and embassies. His involvement appears much more limited this time, but if his followers join the protests en masse the rallies will likely balloon even further. A signal is also anticipated from the country´s top Shiite religious authority, Grand Ayatollah Ali Sistani, which could come in his weekly Friday sermon. Over half of those killed in the last three days have been in the southern city of Nasiriyah, where seven protesters were shot dead and dozens wounded on Thursday alone.

With internet access virtually shut off, demonstrators have struggled to communicate with each other or post footage of the latest clashes. Approximately 75 percent of Iraq is "offline" after major network operators "intentionally restricted" access, according to monitor NetBlocks. The United Nations, European Union and United Kingdom have all appealed for calm, while rights group Amnesty International slammed the response to protests. "It is outrageous that Iraqi security forces time and again deal with protesters with such brutality using lethal and unnecessary force," said Amnesty´s Lynn Maalouf. She said the internet blackout was a "draconian measure... to silence protests away from cameras and the world´s eyes". The protests appear to be largely spontaneous and decentralised, using virtually no slogans or party insignia. Instead, demonstrators have brandished posters demanding a "real country" and even pictures of an Iraqi general who was recently decommissioned after reported pressure by pro-Iran factions. Several Iraqis said they received on Thursday text messages from Abdel Mahdi´s office giving a number for a hotline that protesters could call to air their grievances. Abdel Mahdi came to power in October 2018 as a consensus candidate after last year´s mass demonstrations effectively ended his predecessor Haider al-Abadi´s chances at a second term. He pledged to reform inefficient institutions, eradicate corruption and fight unemployment -- unfulfilled promises that appear to have pushed protesters over the edge this week. In his speech on Friday the premier insisted security forces were abiding by "international standards" in how they were dealing with protesters. He had previously infuriated many by blaming the violence on "aggressors who... deliberately created casualties".