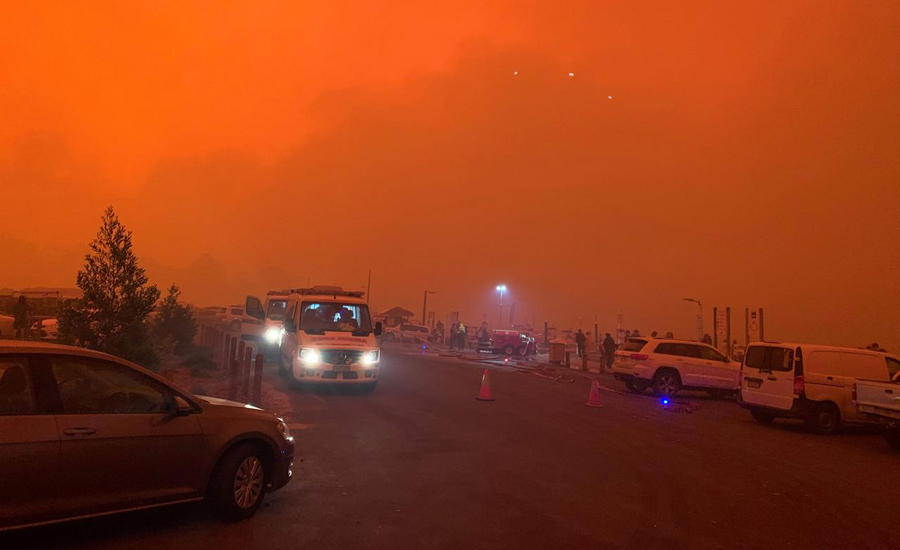 MELBOURNE (Reuters) - Thousands of tourists and residents in an Australian seaside town hunkered down in public buildings or waded into water at the seafront on Tuesday as wailing emergency sirens warned of a looming, fierce firefront. With the coastal town of Mallacoota ringed by wildfires and the main road in and out of town cut off, residents and holidaymakers were forced to head to the local gymnasium or waterfront as embers swept through the town. Robert Phillips, co-owner of a Mallacoota supermarket, told Reuters he was sheltering around 45 people in his store, while others had headed to the town’s main wharf. “There are spot fires all over the place - the embers are blowing everywhere down the main street,” Phillips told Reuters by telephone. “There are a lot of kids in here that can’t breathe properly.” Australia has been battling huge bushfires, mostly across its east coast, for several weeks. The blazes have destroyed more than 4 million hectares (10 million acres). Authorities said on Monday they feared three people had been killed in New South Wales while four others were missing in Victoria after powerful blazes in both states over the past 24 hours. Scores of homes and properties are thought to have been destroyed, and power cut to several towns that are still in the fires’ path. Wildfires have killed nine people since October, including three volunteer firefighters. Prime Minister Scott Morrison said significant firefighting efforts would continue for weeks “and I fear, in the months to come.” “To those fighting these fires; please be safe, and continue to pull together in this difficult time,” Morrison said. “Your country is behind you every step of the way.”

Social media posts by some of the thousands of people still in Mallacoota showed blood-red, smoke-filled skies. Authorities said three firefighting teams had been deployed there in an attempt to beat back the fire’s advance. One photograph of the town’s beachfront, which is hugely popular during the current summer holiday season, showed people laying shoulder-to-shoulder on the sand, some wearing gas masks. Victoria state fire commissioner Andrew Crisp said 4,000 people were sheltering on the beach. Among them was local Mark Tregellas, a retired policeman, who had packed up his most precious possessions in his campervan to head to the overcrowded boat ramp car park. Tregellas said the scale of the threat and evacuation was unprecedented, adding that he’d heard around a dozen gas cylinders exploding throughout the morning. “Hearing gas cylinders exploding means they are more than likely attached to a house, which is not boding well,” he told Reuters by telephone from the waterfront, where winds were whipping audibly in the background. Local community radio presenter Francesca Winterson, who was hunkered down in a building on the town’s main street, told Australian Broadcasting Corp that emergency sirens were accompanied by loudspeaker announcements throughout the town warning people to take shelter immediately. “It’s absolutely horrific at the moment,” Winterson told ABC. “We have got blustering winds, we are surrounded by red sky, choking dust, choking smoke and embers are falling on the town and we are completely isolated.”

Authorities said the main firefront was moving up the coast and warned people in its path to seek shelter close to the beach. NSW Rural Fire Service Commissioner Shane Fitzsimmons said fire crews described the scene of the overturned firefighter’s truck as “truly horrific, a fire tornado”. “Under the hot, dry windy conditions we’re expecting today there’s every chance we could see new fires start as a result of some of that activity,” Fitzsimmons said. Bushfires were also burning on the outskirts of Sydney, cloaking the harbor city in smoke ahead of planned New Year’s Eve celebrations, which authorities said would go ahead despite some public calls for them to be canceled in solidarity with fire-hit areas in New South Wales. “Many of us have mixed feelings about this evening, but the important thing we take out of this is that we’re a resilient state,” NSW Premier Gladys Berejiklian told reporters. “I don’t want to take a second away from the deep sense of loss and tragedy many people are feeling across the state.” Authorities confirmed on Tuesday that many of the recent blazes have been sparked by lightning strikes. Much of the eastern part of the continent has suffered under years of drought that has created tinder-dry conditions susceptible to flare-ups.