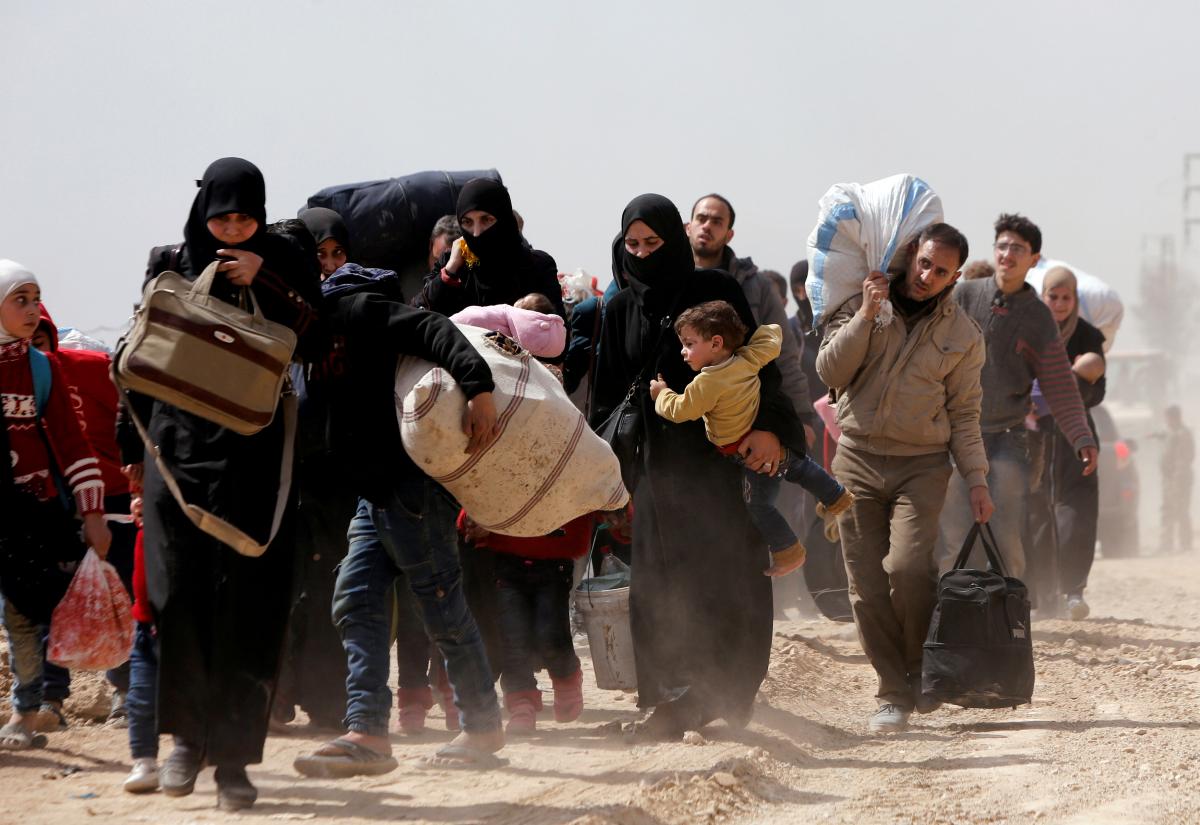 BEIRUT (Reuters) - Thousands of civilians streamed out of their towns on Saturday to escape battles in the north and south of Syria, where two different offensives have prompted an exodus in recent days.

A new wave of people fled a rebel pocket to army lines in eastern Ghouta near the capital Damascus, as rescuers and a monitor said air strikes pounded the besieged zone.

In the northern Afrin region, people fled as Turkish war planes struck the main town, Syrian Kurdish forces and the monitor said. More than 150,000 people have left the town in the last few days, a senior Kurdish official said.

The two offensives - one by the Syrian army with Russia’s support, the other led by Turkey with allied Syrian rebels - entered decisive phases this week. Both have shown how foreign backers and their Syrian allies are reshaping the map after the defeat of Islamic State’s self-proclaimed caliphate last year.

Turkey launched the cross-border offensive in January against the Syrian Kurdish YPG fighters who control Afrin.

In its month-long assault, the Syrian military has marched into much of eastern Ghouta, the last major insurgent bastion around Damascus.

Troops splintered Ghouta into three besieged zones in one of the bloodiest offensives of the seven-year war. Residents came out in their thousands this week for the first time, from the southern pocket around Hammouriyeh town.

State media said 30,000 more civilians reached army positions on Saturday, including some who started leaving the Harasta zone as well in a new outflow.

Men, women, and children walked along a dirt road, staggering under bags and suitcases, footage on state TV showed. Many carried infants on their shoulders or pushed them in strollers. Some elderly people hobbled on wooden sticks.

The Syrian Observatory for Human Rights, a UK-based monitoring group, said air strikes on Zamalka killed 30 people gathering to leave for government lines in the morning. Damascus and its ally Moscow say they only attack armed militants and seek to end the rule of Islamist insurgents over the suburbs.

The rebel factions accuse Damascus of trying to depopulate opposition towns and deny its charges that they have blocked people from leaving.

The United Nations has said the exact number of people fleeing is not known nor are the destinations of all evacuees. Mobile clinics were open and some people were taken to hospital in the capital, it said.

The governor of rural Damascus, Alaa Ibrahim, said the government was setting up new centers due to the massive crowds.

Residents would go back “in a very short time”, Ibrahim said. “As the army advances ... we will return the citizens to their homes ... then we will continue providing services.”

An army officer in charge of arrivals in Adra said authorities had dispersed 25,000 people in recent days across temporary shelters there and in two nearby towns. In Adra, the newcomers stayed in schools, receiving food, water, and medicine, he said.

The officer said boys and men between the ages of 15-60 could “settle their affairs” with the state by writing a vow that says “I pledge not to return to armed actions.” Some 1,500 had done so in the town, he said.

The state has proposed such settlements before for those who accept the return of its rule in other enclaves it seized with the help of Russian jets and Iran-backed militias.

Khaled Hamad, a shepherd, said he signed a pledge after leaving Hammouriyeh with his wife and five children on a tractor. “They said now we were within the state’s embrace,” he recalled.

The last few days inside had become so harsh that his family ate their cow’s food, he said.”(Now) they eat every hour.”

Hamad said militants in Ghouta had fired at his brother, killing him and injuring his sons, for trying to get out.

An estimated 12,000-16,000 people had already left Ghouta before Saturday, while more than 48,000 were reportedly displaced in Afrin, a UN aid official in Syria has said.

The Turkish military has pushed the YPG militia back from the border and nearly encircled it with advances on the western and eastern flanks of Afrin town. Ankara sees the YPG as an extension of the outlawed Kurdish PKK which has waged a decades-long insurgency inside Turkey.

“We can enter Afrin (town) any second. We can give you the good news any minute,” Turkish President Tayyip Erdogan told a congress of the ruling AK Party. “Conquest is close. We walk towards that aim.”

Turkish air and artillery strikes rained down overnight and in recent days, driving tens of thousands out of the main town by car and on foot, Kurdish authorities and the Observatory say.

Hevi Mustafa, a senior civic official, said people fled the main town to other Kurdish-held parts of the region and to government territory. Many were stranded out in the streets without food, she said.

The Turkish military denied on Saturday it had struck a hospital in Afrin, saying it waged the campaign in a way that would not hurt civilians.

The YPG and the Observatory had said a Turkish air strike on the town’s main hospital killed 16 people the night before.

Rezan Heddo, a YPG media adviser, and state TV, said people arriving in the nearby towns of Nubul and Zahraa, under government control, received some aid.

The journey was “catastrophic” for most residents as they walked dozens of kilometers and slept out in the open, he said.

Inside the town, “there is no water, there are no hospitals,” Heddo added. “There are civilians under the rubble and no capacity to get them out.”