ISLAMABAD (92 News) – Three chief ministers staged a walkout from the meeting of Council of Common Interests (CCI) and expressed their reservations about the development expenditures in the budget 2018-19 on Tuesday. Sindh Chief Minister Syed Murad Ali Shah said that the approval of the PSD in the absence of three chief ministers is illegal. “No one has right to present the budget of the next government,” said KPK Chief Minister Pervaiz Khattak. Balochistan Chief Minister Abdul Qadus Bizanjo said that the schemes were given with the consent of the Federation. Meanwhile, the Council of Common Interests (CCI) has unanimously approved the ‘Pakistan Water Charter’ pledging commitment to the National Water Policy. 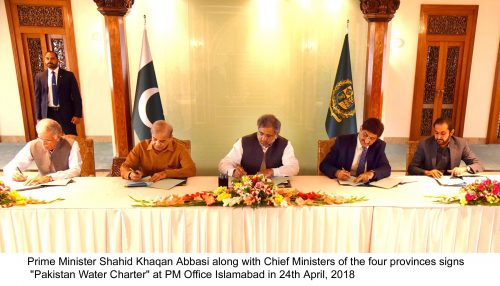 The meeting of the CCI was held in Islamabad with Prime Minister Shahid Khaqan Abbasi in the chair, while chief ministers of all the four provinces, federal and provincial ministers concerned and senior officials also attended the meeting. The Pakistan Water Charter was signed by Prime Minister Shahid Khaqan Abbasi, Chief Minister Punjab Mian Shahbaz Sharif, Chief Minister Sindh Syed Murad Ali Shah, Chief Minister KPK Pervez Khattak, and Chief Minister Balochistan Abdul Quddus Bizenjo. Deputy Chairman Planning Commission Sartaj Aziz briefed the meeting about salient features of the policy. He said the policy has been prepared after consultations with all major stakeholders. He added that a national seminar was also held to reach the consensus. He said that the policy encompasses priorities of water uses, environmental integrity of the Basin, impact of climate change, hydropower generation, water rights and obligations, sustainable water infrastructure, water related hazards, and conservation measures. Sartaj Aziz further said the implementation of National Water Policy will be ensured through ‘National Water Council’ to be chaired by the prime minister and comprising Federal Ministers for Water Resources, Power Finance, Planning Development & Reforms and all Provincial Chief Ministers as members. A steering committee, headed by Federal Minister for Water Resources, will monitor the implementation with representatives from Federal and Provincial Governments and concerned departments. Khyber Pakhtunkhwa presented a brief on implementation of Kazi Committee Methodology for calculation of Net hydel Profits. After detailed deliberations, the CCI directed Ministry of Inter-Provincial Coordination, Planning Commission and Ministry of Water Resources to reconcile the claims in consultation with provinces and resubmit the issue for decision in the next CCI meeting. Meanwhile, meeting of the National Economic Council is underway in Islamabad with Prime Minister Shahid Khaqan in the chair. The council is deliberating upon national development outlay for the next financial year.