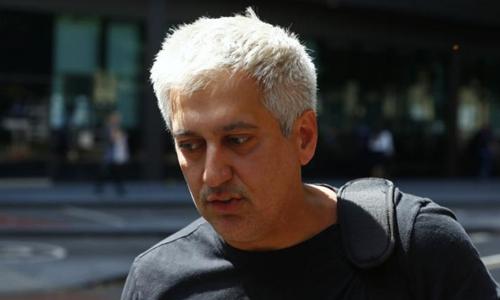 LONDON- Three former Barclays (BARC.L) traders jailed for manipulating Libor benchmark interest rates after a London trial have been denied a request to appeal against their conviction and sentence, the wife of one said on Friday.
Julie Pabon said her husband, Alex, and former colleagues Jay Merchant and Jonathan Mathew were recently notified that their requests had been rejected by the Court of Appeal. The men's lawyers and the UK Serious Fraud Office (SFO), the prosecutor in the case, did not respond to requests for comment.
Pabon, an American, was sentenced to two years and nine months in jail in July. Merchant, his former New York-based superior, was sentenced to six-and-a-half years, and Mathew, a London-based junior rate submitter, was handed four years.
"I am shocked and saddened yet somewhat relieved that our fight appears to be nearing the end," Julie Pabon wrote in an email received by Reuters. Julie Pabon, an American who lives in the United States and had appealed directly to the head of the SFO, David Green, on behalf of her husband, said Alex had sent her a text message on June 30 after his London trial saying: "I'm sorry ... guilty..." "Even though it appears that we will not receive justice, I look forward to moving on with our lives at some point in the near future," she said. "I am saddened that this is the result but I know that the truth will eventually come out and my husband will be exonerated." Merchant, Mathew and Pabon denied one count of dishonestly skewing Libor, a benchmark for rates on about $450 trillion of contracts and loans worldwide, between June 2005 and September 2007. In an 11-week trial, they argued that their bosses had sanctioned attempts to influence rates, that they did so in full view of compliance staff, and that such practices were widespread at the time. But the jury found them guilty, and the judge said they had abused their position of trust and undermined the integrity of the banking industry. They were told they would serve half their sentence in prison before being released on licence. The men were convicted four years after Barclays became the first of 11 powerful banks and brokerages to be fined for its role in the rate-fixing scandal, sparking a political backlash that forced out former Chief Executive Bob Diamond, an overhaul of Libor rules and the U.K. wing of the criminal inquiry. Two other former Barclays traders face a re-trial in February after the jury was unable to reach a verdict in their case. A sixth former Barclays trader, Peter Johnson, pleaded guilty and was sentenced to four years. Tom Hayes, a former UBS (UBSG.S) and Citigroup (C.N) trader, was the first man convicted of Libor manipulation last year. He was sentenced to 14 years in jail, reduced to 11 years on appeal. -Reuters