Three stabbed, one dead, in Australia's Melbourne, terror not suspected 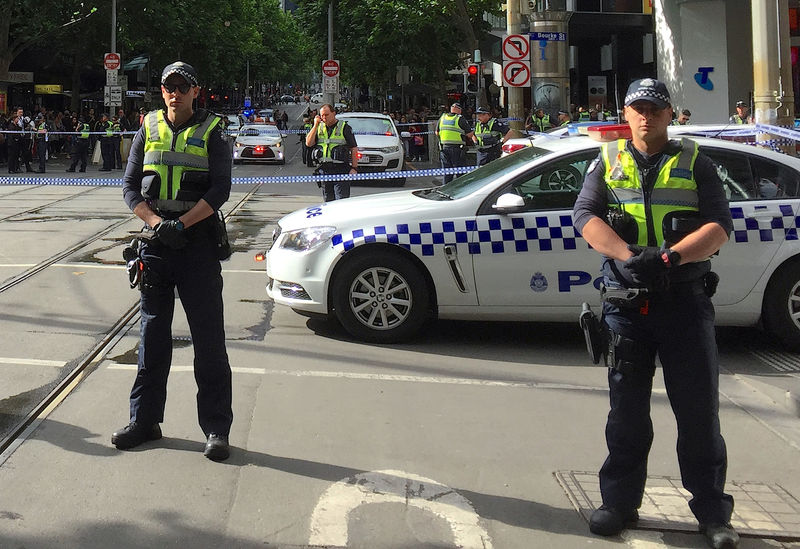 Three stabbed, one dead, in Australia's Melbourne, terror not suspected

MELBOURNE (Reuters) - A man stabbed three people in the Australian city of Melbourne on Friday, killing one, before being shot and wounded by police, who said the attack was not believed to be terror-related. Video posted to Twitter and broadcast on television showed the man swinging a knife at two police officers in the city’s crowded downtown area, while a car burned in the background. One of the officers then shot the man and he collapsed to the ground clutching his chest, the video showed. Other footage showed two stab victims lying on the ground nearby and bleeding. “Three people have been stabbed, unfortunately one of them is deceased at the scene,” David Clayton, police superintendent of Victoria state, told reporters. “There is no known links to terrorism at this stage. We will keep an open mind as to whether there is any link.” Clayton said police had arrived at Bourke Street, a busy shopping thoroughfare, in response to a car fire. As flames engulfed the vehicle, the man attacked them and they shot him in the struggle, he said. Video showed chaotic scenes as bystanders scattered. One man charged at the tall attacker with a shopping trolley just before police drew their weapons. A witness who gave his name as Markel told Australian Broadcasting Corporation radio: “Bystanders were yelling out ‘just shoot him, just shoot him’.” Warning sirens sounded after the attack and police sealed off the downtown area, usually busy with shoppers and diners on a Friday evening. The bomb squad was deployed to assess the area and television footage showed police combing the street for evidence. The body of a victim lay under a sheet on the street. The street where the car caught fire was the scene in January 2017 of a fatal but not terror-related incident in which a man drove his car at pedestrians at high speed, killing six people and wounding about 30.