KARACHI (92 News) – Three young brothers drowned in a pond filled with rainwater near Sabzi Mandi in Gulshan Mumaar area on Wednesday. The fourth brother was taken to hospital in a serious condition. The deceased aged between five and 11 years were identified as Abdul Bari, Muhammad Nabeel and Shafiullah. Abdul Ghani was hospitalized. All the brothers were playing near the pond when they accidentally fell into it. Eyewitness told 92 News that all three brothers drowned while rescuing each other. They said that the pond was filled with water after recent rains. “The tragic incident would have not happened had rainwater drained out timely,” he added. 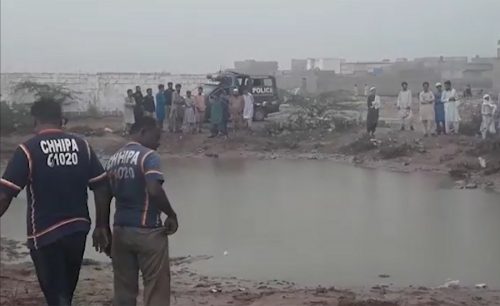 The police said that locals recovered the children and shifted to hospital. On the other hand, all roads became ponds after the light rain in several areas, including Sarjani, FB Area, Gulshan Iqbal, Gulistan-e-Jauhar, Malir, Airport, Landhi, Korangi, Defence, Clifton, Sadr and Layari. After the rain, traffic was badly disrupted due to the overflowing drains. Several feeders also tripped due to the rain. The K-Electric spokesperson said that power was switched off as precautionary measures. He asked the people to stay away from broken wires and poles. Citizens are facing numerous problems due to the accumulated rainwater. Meanwhile, the Met Office informed that a monsoon low has reached Karachi from Bay of Bengal and rains are likely to continue till Friday. After the issuance of alert, the DG Health has canceled the leaves of staffers in all hospitals of the city.